THE CURIOUS CASE OF KIMI RAIKKONEN 2014

It’s time to delve into Kimis 2014 season. Now this is not going to be some sort of apologetic post although some will probably perceive it as that. I simply want to go through his season, race by race. Basically to try and understand what the hell is going on. Because there is no doubt that the season has been abysmal so far. It’s kinda like a nightmare that you just want to end. Hence my lack of motivation to write the normal amount of reviews like I usually do.

Has Kimi been underperforming? No, I dont think so. He has looked less than impressive in a race or two. Canada comes to mind. But we sometimes need to look past the race result itself. He has had his fair share of issues and incidents that hampered his race and results and we need to include these factors in the equation.

10 years ago, Kimi actually had a season similar to this one. After 10 races in 2004, he had 28 points using todays points system. The main problem was not only the car being inferior to the mighty Ferrari that year. But also its horrible reliability. 8 out 18 races Kimi retired because of technical problems. (Yes, even Germany was technical, as his rear wing broke off and caused the accident.)

The only saving grace for McLaren that year was Kimis stunning victory at Spa from 10th place. A feat he would repeat in 2009, saving the face of another team that had given him a dog car.

But this is 2014. So what do we know? Ferrari have managed to not only produce a vastly inferior engine to the Mercedes but also a very tricky car to drive and set up. Kimi had his fair share of problems in pre-season testing. Which gave him a whopping 1000 kms of less tracktime compared to his teammate. But let me just do a quick rundown of his races this season.

Issue: Traffic every lap in qualifying. He spun into the wall but that had no effect on his final quali result.
He got a hefty bang from Kobayashi during the start. But suffered from unpredictible and changing handling throughout the race. A lot coming from the brake-by-wire system that was far from being perfect at that point. And it would plague him for several races to come.

Issue: Kimi was 2nd and 3rd in all practice sessions but when the rain came in qualifying, he could only manage 6th.
Kevin Magnussen drove into the back of Kimi on lap 2, giving him a puncture. This dropped him to the very back of the grid and spent the rest of the race fighting his way up to 12th position.

Issue: Good qualifying. But gets another hit from behind from Kevin Magnussen on lap 1 of the race. No visible damage or puncture this time. The nature of the Bahrain track highlighted just how underpowered the Ferrari was to the Mercedes cars. And he dropped back to 10th as he was out-tractioned and out-accelerated by several cars.

Issue: Lots of different problems in practice sessions. Gear change problems in Q2 stopped Kimi from going to Q3.
In the race he had to back off in the final parts of the race over concerns about high fuel consumption. Complained over an unusual lack of grip during the race. Low temperatures combined with Kimis over-easy smooth driving style is likely a big reason.

Issue: Ferrari politics. The presence of Santander CEO, Emilio Botin at the race, saw Ferrari switch the pit stop strategies for Alonso and Raikkonen so that the Spanish Santander backed driver could finish in front. Also part of a plan and effort from Ferrari to try and persuade Alonso into staying at Ferrari.

The power of Alonsos car was also turned up for qualifying in an attempt to make sure that Alonso qualified ahead of Kimi. (FIA requested after qualifying that the power was turned down only on Alonsos car, not Kimis.) When that didn’t happen, action had to be taken during the race. It was a sham and a farce that not many people in the public know about. To quote Kimi in the team radio after the race: “I didn’t come here to be the second choice. You should explain me this shit!”

Issue: A great start and Vettels retirement sees Kimi running 3rd behind the two Mercedes cars. He is nearly on the same pace as the Mercs and is all but set for a podium finish. But the clownish Max Chilton managed to run into him during a safety car period, giving him a puncture. After stopping for new tires, this dropped him way back and he could only manage 12th on the near impossible to pass streets of Monaco.

This horrible misfortune was highlighted by the fact that Kimi was not informed over the team radio during the SC period, that backmarkers were about to unlap to get back on the same lap. If he had been, the collision with Chilton would not have happened. 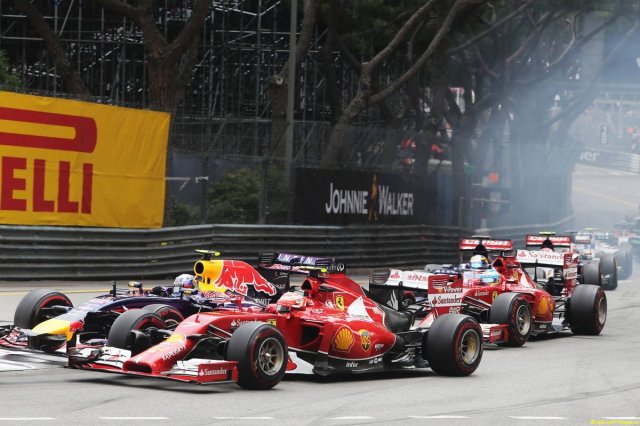 Issue: Lack of running in practice. Kimi complains about the car sliding around more than usual on super softs during qualifying.
Some brake problems in the beginning of the race. Was always stuck behind cars during the race. Kvyats Toro Rosso for a big part of the race. Yet more inconsistent handling. The lack of oomph of the Ferrari engine made it very hard to pass even if the pace was much faster. In general a very unimpressive race to watch for a Kimi fan. His single point only came due to the crash between Perez and Massa.

Issue: Made a small mistake in qualifying that cost him 1 or 2 places.
In the race, his brakes started overheating on the 2nd lap. Forcing him to slow down. Ferrari lets him stay out for 3 or 4 laps too long before his pitstop, making him lose 3 race positions. He lost 1-2 seconds a lap and still he was not brought in. These kind of calls boggles the mind.

Issue: Wet/dry qualifying session. A golden chance for Ferrari to take advantage of, but fails miserably with both drivers.
Kimi has a horrible monster-shunt on the first lap. He runs wide at the exit of turn 5, hits a dip before re-entering the track which makes him lose control of the car and crash heavily into the guardrail. Race over for Kimi and Bianchi steps in as test driver as a precaution for the test sessions the following week. Otherwise and thankfully, Kimi is ok to race in Germany. 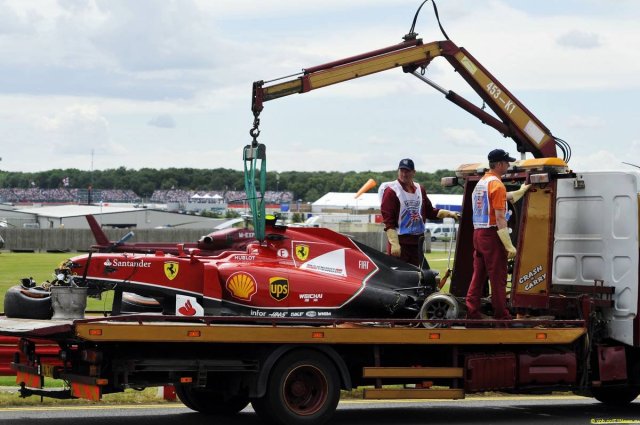 Issue: Once again when fitting the supersofts, the car slides around all over the place. He loses the back end in turn 2 and can only manage 12th.
During the race, Kimi seemed to be the punching bag of choice when passing or being passed. At one point he was sandwiched between a Red Bull and a Mercedes which made him lose a big part of his front wing. This worsened the graining factor, causing loss of pace. Kimi does however finally say that he was able to drive the car the way he wanted to – apart from these problems. First time we really hear this.

Issue: Ferrari does another monumental and disgraceful blunder. They gamble that Kimis time is quick enough for Q2. He asks them several times if they are really sure. They are. Except it wasn’t. So Kimi starts 16th when he would have been comfortably in Q3.
Easily the best race for Kimi this year. Great fightback from 16th to 6th. If not for getting stuck behind Massa, his result would have been even better. It shows some promise for the remainder of the season.

As you can see, (and it has been said before) Kimis problem is not that he suddenly decided to suck. It is coming to grips with a very unpredictable car in terms of setup vs. Kimis driving style. It is coming to grips with a far from perfect brake-by-wire system. As well as battling horrendous team-calls. Political or not. Throw in the likes of Kevin Magnussen and Max Chilton into the mix and you got a season from hell. But there is some light at the end of the tunnel.

Spa is coming up in less than a week and there is hope for another great result. Especially when we know how Kimi simply loves this track and masters it better than his peers. Unfortunately, some realism have to be introduced. Even if the car feels better between Kimis hands, the Ferrari engine is still down on power to the Mercedes powered cars. And horsepower does matter a lot more in Belgium than it does in Hungary. But a good result could still be on the table. And heaven knows that we Kimi fans need one these days.

Finally, a big congratulations to Minttu and Kimi. As they are now expecting a child together. Let us hope that the child will inherit Kimis uncanny car feel so the next generation can also enjoy a Raikkonen phenomenon 😀 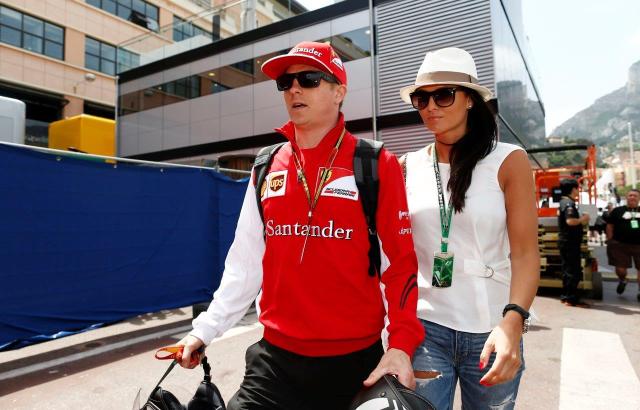 6 Responses to THE CURIOUS CASE OF KIMI RAIKKONEN 2014