MY RENDEZ-VOUS WITH KIMI IN THE NORWEGIAN FORESTS

Well this was a treat! Just the day before yesterday I heard that Kimi was coming to Rudskogen Motorpark for a Santander event on the 28th of May. I was like whaaaat. And then I was like wah-wah-wah-waaaah (sad trombone). Because I was working that day. Thanks heavens that I have a nice employer. I asked for a day off ridiculously late and I still got it granted. So a big thank you to Mr. Magnus B. He loves cars and motorsports himself, so that obviously helps. 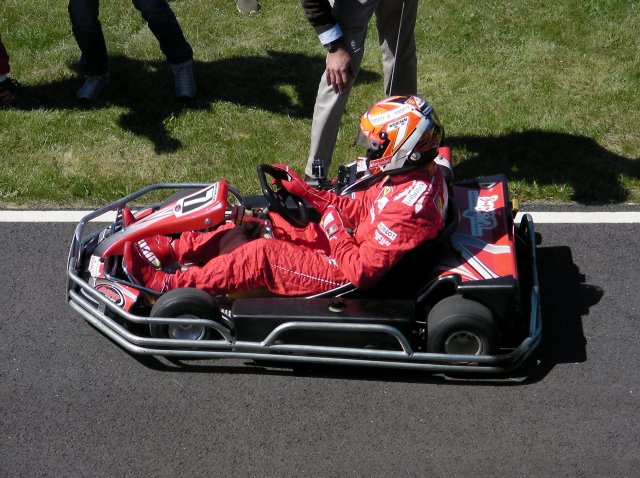 Ok. The Santander event was so the press could race against Kimi in rental karts and do some bits for their various channels, programmes and shows. Anyway, I still had to pick up my car from the MOT test. Which it failed. That meant I had to go home, get the other car and drive there. So I was late. And Kimi is not exactly known for sticking around. But luck was on my side. As I arrived there, the first race was just about to start. And I managed to rip out my videocamera and start recording. My footage below:

As you can see Kimi started last but was up to second place in just a few corners. Haha. Great fun to watch. But it was also noticeable that his kart lacked a little top speed to most of the other karts and was also slower to accelerate. As there typically is differences when it comes to rental karts. Perhaps it was Santander that made sure of that. So that the kart would be as similar to the F14T as possible. So he was not able to catch the guy in first place who is a norwegian race driver. Here is some great onboard footage of the start and the first lap: http://www.iltalehti.fi/iltvurheilu/201405290123740_v9.shtml

They did another race. This time Kimi and the race driver, Atle Gulbrandsen, both started last. He also works as a commenter for the norwegian broadcast of the F1 races. Kimi gets a horrid start but still gets up to second place after one lap or so. But again, the kart was too slow to catch the other guy. Anyway, it was all good fun and it looked like Kimi enjoyed it too. Unlike Vettel who I can guarantee would demand a change of karts, Kimi is not too bothered about these kind of promo races.

The funny part here is that Mr. Gulbrandsen was really raving on his Facebook page and on his Twitter account about him beating Raikkonen. And when Ferrari first wrongly wrote that Kimi won both races, he went apeshit on Twitter, saying they were lying and that he won, not Kimi. Yes, you beat Kimi. In a rental kart. Newsflash – it was just for fun. And it wasn’t real karts. The Ferrari statement was just their usual pre-fabricated PR they probably made days before the event.

Check out this tweet:
@Atlegulbrandsen
@InsideFerrari Why are you lying about the results from the karting race today? I won both races, not Kimi… #ForzaFerrari
#F1 #Ferrari

Wow. Anyway Mr. Gulbrandsen, if you seriously think you can beat Kimi Raikkonen in a real kart – think again. But don’t bash him guys. I would be proud myself in his position. And you probably would too.

About Kimi and karting. Here is a story from 2001. Which was a good while after Kimi had raced karts. From the book “Jaamies”:

He (Kalle Jokinen – close friend of Kimi) gave an example which enlightens Kimi’s top qualities – When Kimi finally went to F1, I stayed in the karting business and moved to Italy and worked in Haase’s factory. Once in 2001 I was testing with professional driver Mario Spinozzi on Garda Lake’s karting track. Kimi happened to call and asked where I was. I told him I was at Garda’s factory and Kimi said he would come and have a look, Jokinen said.

Kimi came and watched what the men were doing for some time. Then he got the old itch and finally Jokinen asked Räikkönen if he would want to try driving. – He said that would be okay for him, Jokinen remembers. On the Garda track a below 40 second laptime in a kart is a really good time. Spinozzi drove 39,8 laps at his best so the men had a really good testing pace. Yet he complained at the same time to Jokinen about engines and some other problems. – Kimi jumped into the car and immediately drove a 39,9 lap. He asked me to do a few changes, went back on the track and once again did the hard to do below 40 laptime.

The Italian engineman asked me if Kimi could do some testing since he gives such clear feedback about everything, Jokinen told. Räikkönen said that he can test the engines. He could tell about the qualities of all five engines he was testing after driving each for a short time only. The engine-man was blown away and wondered how Räikkönen had the ability to give so much different information. He thought Räikkönen was a living computer. In the end Räikkönen told the Haase-men that he would ‘try a bit’ once more, asked for a specific engine and setups and some changes. Jokinen knew what was about to happen.

– Kimi went onto the track: first lap 39,3 and he wasn’t even using new tyres. Second lap was already 39,2 and the third one would have been even faster but Kimi drove the car on two wheels in one corner, Jokinen recalls. Haase’s engine-man was astonished and told his partner: – Our problem isn’t the material, it’s the driver. At that point Spinozzi packed his things and left. He had enough of it.
————————————————————————-

Great story. But back to the Rudskogen event. I was cheeky enough to sneak down amongst the press people. There were really few spectators there. It wasn’t widely advertised at all. Kimi certainly didn’t mind that and me neither. So I was able to get some great close-up footage of Kimi getting out of the kart. And his old rally pal, Henning Solberg also showed up. And they had a friendly chat and some banter between them:

Seeing an opening, I snuck over and took a selfie of Kimi and me. He was nice enough to give a little smile as well. Too bad I look like crap on it. But I’ll take it. He was in a good mood so I also asked if he would mind signing my cap as well. He said “Sure” and “Here you go”. I wanted to say that we are many that support him and that he should get rid of Spagnolo as race engineer. But to be honest I was a little star struck so I just said “Thanks Kimi” and walked away like the chicken I am. The Ferrari PR lady was also standing right there, so I dont think Kimi would share any thoughts about Spagnolo anyway. And certainly not to me. But once I buy a large share of his moto-cross team – then! 😀

After a while, some snooty Santander guy came up to me and asked me where I was from. “From F1bias.com of course”, I replied. That didn’t seem to impress him and asked if I could move up the hill a bit and make room for the next segment that was to be filmed. Too bad he didn’t know that my site gets more hits than some of the official press sites represented there. Especially my article about Kimi, Ferrari and Santander that really blows the cover of his entire seedy corporation. I regret wholeheartedly that Kimi is back amongst these wolves that have a hard-on for Spanish drivers in particular. That being said, I was thankful that they threw this event in my backyard so to speak 😉

Snooty Santander guy in to the left of Kimi

Next and final event was a skit for a norwegian TV-show called “Golden Goal”. It’s a show mixed up with comedy and sports and it is very entertaining at times. So I filmed some of that as well. The program will probably run this fall. I will be sure to see if I can link to it later somehow. Kimi looked to enjoy the whole thing. And he nearly collided with one of them as he took off. lol My amateur footage below. Btw, a cameraguy bumped his camera on a colleagues head at 3:55. Haha. 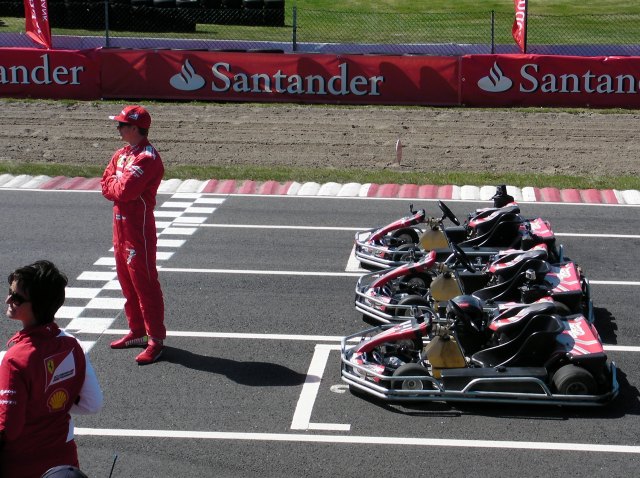 And after that, it was over. The whole thing took place in just an hour. Kimi exited stage right and I began my 2 hour journey home. Pretty satisfied with my day. And I am glad that I could share it with you guys. One more week to Canada. Hamilton will win that one. But can Kimi get his car right so he can consistently outpace Alonso again? Which he will do every day of the week once it behaves just slightly the way he wants it to. Time will tell. That and who will win of the two Merc guys is pretty much the excitement there is left for me this season. But F1 races are few and far between, so I will enjoy them nevertheless.