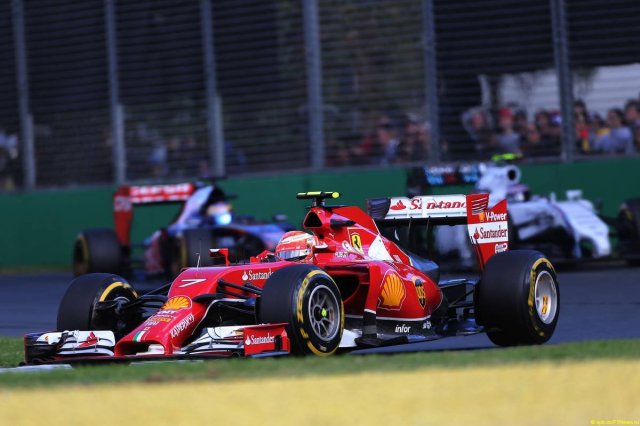 Hello 2014 season. Hello sportsfans. Hello V6 turbo engines AND AWFUL VACCUUM CLEANER SOUND!! *Boo.. Hiss* Well, thats a fine how do you do, you say. Perhaps. But a man needs to vent. I reserve my right to bitch and moan over an era that is now gone by. The howling metallic sound that shook your body and pierced not only your ears but your entire being. It was literally breathtaking. And another overused word: Awesome. Because you were truly in awe hearing those machines fly past you.

Are the cars more advanced now? Sure they are. But people now say that you cant really hear them before they are in front of you. And that is nothing but sad. I am not the only one who is upset either. After the race in Australia, the local organizers are claiming a breach of contract due to the flat sound and disappointing spectacle: http://www.planetf1.com/driver/18227/9218290/Aus-organisers-claim-breach-of-contract

I hope something can be and will be done with the sound. I was planning to go to Monza this year, but I must admit that I am having a serious rethink. Why pay hundreds of euros to listen to go-kart sounds? It is hard enough to comprehend the speed of these cars with the sound. Without the audio part of the experience its frankly just meh..
All right. Thats enough whining about the new turbo engines. For now..

Let me try to ease into the race weekend. I didnt cover pre-season testing here. But Kimis return to Ferrari was not without its niggles. Fact is, he had 1000 kilometres less pre-season testing compared to Alonso. And that showed this weekend. In qualifying, he only managed 12th (upped to 11th after Bottas’ penalty) compared to Alonsos 5th on the grid.

I did follow qualifying on the new F1 timing app and Kimi had traffic every single time he went out. And that made sure he didnt make it into Q3. His spin into the wall played no part of it. But it was a small sign of what a handful the car was this weekend. I will get to that.

By the way – thanks FOM for making the Live Timing on F1.com completely crappy. So you can force us to buy your app instead I suppose. No more sector times. Just green, white or purple dots. No weather data or top speed and so on. Thanks for nothing. I am surprised you had time to work this out. Between removing harmless fan videos from youtube and thinking up new ways to extort money from the fans. Well done. 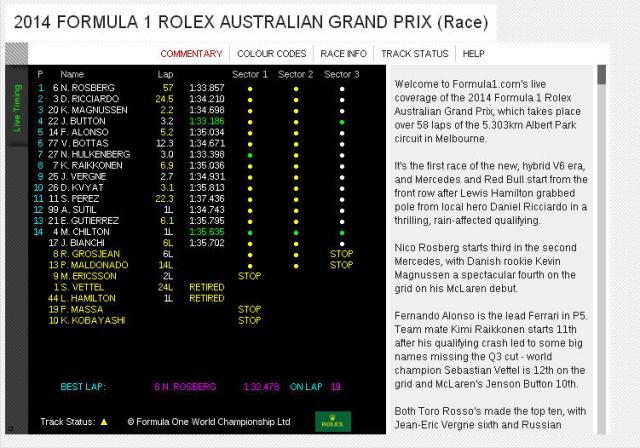 As expected, the Mercedes cars were up at the front. The surprise was that it was a Red Bull that split them apart. A double surprise it being Ricciardo and not Vettel. The Red Bull shows signs of still being ahead of the pack on downforce. But the Mercedes engine has some serious oomph and it has leveled the playing field. Especially when the Renault power plant has been a problem child from day 1 for Red Bull (and the rest of the Renault powered cars).

My countryman, Kevin Magnussen (I just had to get that in there), shone bright on his F1 qualifying debut and lined up in 4th for McLaren. McLaren fans can breathe a sigh of relief seeing that their car is in pretty good shape this year.

The lights go out and it is a polite humming as 22 cars race towards the first corner. Kobayashi in the Caterham locks up and plows into the back of Massas Martini car and both retire. Massa was so mad that his lisp was twice as bad and it made him sound even less intimidating as usual as he called for a race ban of Kobayashi. Turns out it was rear brake failure for Kobayashi, so not his fault this time and he was cleared by race control.

Kimi gets a rocket start from 11th and shoots up to 8th after escaping the mayhem in turn 1. But just barely as replays shows that the back of his Ferrari receives a heavy bang from Kobayashis front wheel. Could just as well have been game over there. But after a short while he makes a brilliant pass on the outside of Vergne on the run to the fast turn 11,12 combination. With Hamiltons retirement he ran as high as 6th just behind Alonso. For all intents and purposes I should just stop here because it pretty much only went downhill from there.

As the tires started to grain, “the car’s handling was not the same.” as Kimi put it to the press after the race. The car was locking its wheels far to easy and he had understeer. The handling was therefore unpredictable under braking but also on corner entry. Add to that a safety car that came out just as he had passed the pit entry, meant that he had to wait behind Alonso and thus losing a position. That Kimi finished 7th is not only thanks to his talent. But mostly to retirements and penalties of better cars ahead of him. 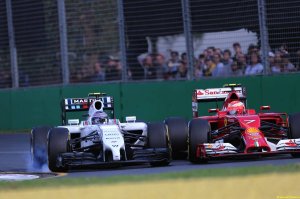 Bottas is on a rampage. The Williams is looking better than it has in many years. That Mercedes deal could not have been timed more perfectly for them. And before you know it, he has taken 6th place from Raikkonen and is about to take 5th place from Alonso when he makes just the slightest mistake. He touches the wall hard enough to break his wheel and give him a puncture. He limps back to the pits and he has plenty of time to lament his mistake. In the end Bottas still finished 6th (5th later on) from being down in 16th after his stop. The Williams is a well engineered car this year. No doubt about it.

So Nico Rosberg crosses the line completely unchallenged and 20-some seconds ahead of Ricciardo and Magnussen. Probably having turned the engine way down 1/3 into the race. Ricciardo is the happiest man on the planet up on the podium. Even trips and falls Webber-style. The joy would not last long as he was disqualified after the race. Reason – the Red Bull used more than 100kg of fuel per hour. Which is the limit. Full story here: http://www.autosport.com/news/report.php/id/112965

On a lighter note, we had a very happy Dane on the podium as well. And he is still smiling. His 3rd place turned into a 2nd place after Daniels penalty. That means that Kevin Magnussens first F1 race is one of the most successful debut races ever for a rookie in Formula 1. Not bad. Not bad at all. It will be hard to equal that in every race. But I hope he shines throughout the season. A very likable down to earth guy. Just like his dad is. 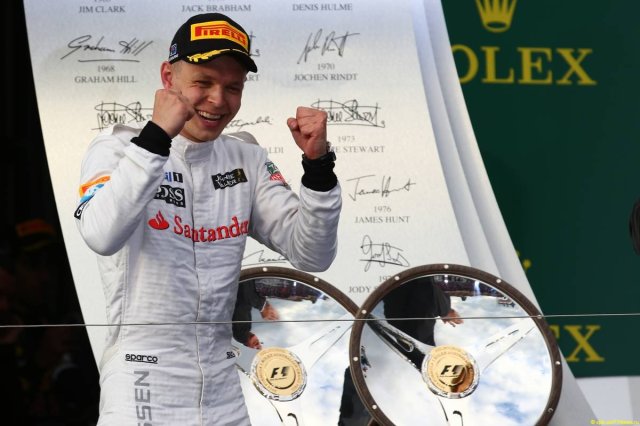 To be honest, I cannot remember the last time I have seen Kimi struggle with a car as much as he did this weekend. The back was stepping out. He had understeer. And maybe the worst was him locking up the brakes every other corner. I have never seen him lock up so much. Ever. If that was not enough, both Ferraris had electrical problems – especially Kimis car. Oh wait, I forgot. The steering is also still crap. Not giving him the feedback he needs.

Pat Fry: “On both the F14Ts, we had some electrical problems, especially on Kimi’s car, which meant he couldn’t use all the car’s potential.” So Kimis car were down on power as well. Putting all that together, its amazing that he finished the race. Even more so in the points. But almost half the field retired – so that obviously helps.

And dont expect Kimis problems to have disappeared in Malaysia. If we are lucky, Bahrain will be better. This link gives a good insight into Kimis serious issues that has to be dealt with on the car: http://www.autosport.com/news/report.php/id/112974
New parts have to be made and fitted and then again adjusted. If they work and improve the car that is. There is something worrying under the surface here. And I will post a piece later this week that takes a closer look at that.

What am I saying? The Ferrari is simply not a good car. It is down on power and downforce to the front runners. And its not pleasant to drive. Not at the moment anyway. The Ferrari engine is down on power to the Mercedes. They are down on downforce to the Merc and the Red Bull. The Williams and McLaren seems to be on par or thereabouts on downforce but are ahead on engine. And those cars are simply more sorted at this point. Machinerywise, the F14T is the 4th best car. And that is with a glass half full perspective. When Red Bull get their power unit problems fixed, Ferrari will be the 5th best car. Unless they improve. And fast.

Is it all doom and gloom? No, but its bad. They have the most experienced and arguably best drivers in the cars. And they will make up for some of the shortcomings. But enough to challenge Mercedes? Or Red Bull when they get everything in working order? A fired-up McLaren team with Ron Dennis back in charge? I just dont see it happening. They can develop and try to catch up, sure. But Mercedes and Red Bull are not exactly teams that are short of cash or know-how. Neither is McLaren. Ferrari will have to strike gold both on aero and power plant tune-up (within the regulations) to be able to fight for wins. That is my assessment. I wouldnt mind being proved wrong.

Could be worse though. Kimi could have been in a Lotus this year. That being said, put your money on Rosberg or Hamilton this year. Now wasn’t that a fun review?

I saw some encouraging tweets from @PitLaneTalk concerning the Ferrari PU (power unit) that I would like to share.

He tweeted yesterday that Mercedes was miles ahead on engine performance compared to Red Bull. In the region of around 100 horsepower. Which is insane. He also tweeted that Ferrari is unable to exploit engine potential because they have ERS problems and cant run at full power. Ok, not exactly uplifting but here are the tweets in question:

@pitlanetalk
We believe the Ferrari engine is as powerful as Mercedes (!), but their ERS cannot run at full capacity yet due to electrical glitches.

@pitlanetalk
F14-T will receive a software update expected to optimize ERS and boost power by 30%. Ferrari will apply remapping in Bahrain.

@pitlanetalk
Even if it’s mechanical, they can modify the PU despite homologation, since it’s a reliability measure to prevent electrical glitches.

So I leave you with a shimmer of hope. Assuming the guys sources are correct. Ferrari will still have to play serious catch-up as we expect another Mercedes win in Malaysia.

Kimi is not quite sure who this Magnumsen guy is.

Images ©  Photo4/XPB Images
Do not hesitate to contact me if you need any of these photos taken down for any reason.