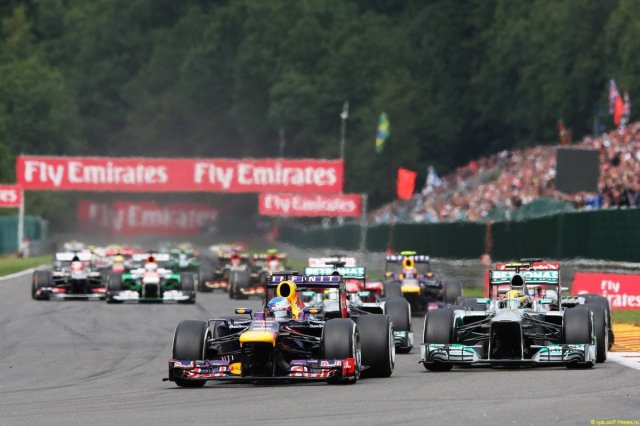 Oh, how treacherous a mistress of a track you are. Your glorious curves and sweeping bends, they do entice us so. Down you go from La Source and through the most infamous of corners. The long relentless climb past Blanchimont towards the bus stop chicane, it ensnares us, draws us in. You sit unrivalled in your throne of green in the Ardennes. Echoes of races past and glories now forgotten still linger in the moist air.

And when it is revisited by your uncrowned king, oh what a sight to behold it becomes. None can match his commitment and attack into Pouhon. Passing the fiercest of competitors in unthinkable places. Charging through thick smoke down the Kemmel straight with ice in his veins. A match made in racing heaven. Spa-Francorchamps and the Iceman. But it is a dangerous liason indeed. The thrills are the highest of high. But on the opposite side of the scale, so are the disappointments. And yet we love it. Even if the emotions take us high and low, in twists and bends much like your grand design, we would not have it any other way. Until next year it’s au revoir. You track of tracks.

And with that we are back from the summer holidays with a bang. My wife and I had a kid in the meantime. (In case you missed my previous post). Happy, content and ready for some F1 action. I propose that the Spa circuit sends some extra chills down the spine of a Kimi fan. Because he is mighty around here. It is likely the track on the calendar where talent and commitment matters more than elsewhere.

We get some news that Lotus are getting very ambitious with an extra long wheelbase for the car and that they will run the passive DRS system this weekend. But then we get the news that no, they will not be doing any of that after all. Due to lack of dry running.. I don’t know about you, but I am getting some serious deja vu reading that. Perhaps in Monza. If you are an optimist: http://www.autosport.com/news/report.php/id/109380

The most talked about man in the paddock is Kimi and his whereabouts for next year. Red Bull, Lotus, even Ferrari? He was set up for the press con but failed to show due to “illness”. I didn’t buy it at the time. Very convenient way to miss out on a lot of inevitable questions. However, he did sound a little bit under the weather judging by his voice in the post-race interviews so I will give him the benefit of the doubt here 😉

Based on that, hopes were not high in anticipation for the quali sessions. The drying Q1 session saw both Marussias going into Q2. A first for the team. In Q2, we get a glimpse of what might have been. If not for the whimsical nature of the Spa itself. The track dries and even though the Lotus has been trailing in all practice sessions, Kimi clocks the fastest time. Oh boy, oh boy. 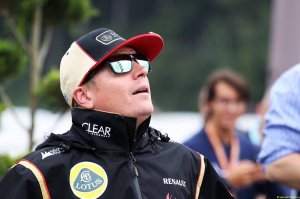 On to Q3 and its pretty much over before it began. Rain pours down and everyone has to go back to get inters. There are a couple of things that really grinds my gears here. Have you noticed how Kimi many times are one of the first cars, if not the first to go out in a lot of quali sessions? But now – when he really really needed to be in front of the line, he was not. Why did he need it? Because the first cars that went out, the Mercedes and the Red Bulls, they got an extra lap at the very end which improved their final time massively. Kimi? He missed it by seconds. Result, 8th on the grid. Yes, it is Spa and overtaking is very possible. True. But Kimi had his car set up for the twisty sector two and not the straights. He needed to be at the front to have any chance.

Hamilton on pole, Vettel on 2nd. Lights out and it’s OMG – where is Grosjean?!! Goodness me, he made it thru turn 1. Wow. The cars go up the Kemmel straight and Vettel has an insane tow behind Hamilton and passes him for the lead with relative ease. And that was pretty much it. Vettel was nowhere to be seen until the finish line. 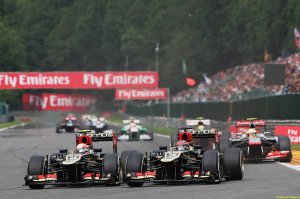 As for our protagonist, he tucks in behind Grosjean but passes him into Les Combes on lap 2. After that he has Hulkenberg in his sights. But there is a problem. First noticed on lap 7. A whole lot of brake dust is plummeting out from Raikkonens left front. A one time thing? No, it keeps happening every corner. I pretty much know that the car is living on a limited period of grace if they don’t do something. Surely, they should pit him immediately to check for problems? The pit stops are not far away anyhow.

But no, they keep him going for 7 more laps before they pit him. By then the damage is done. The irony is that of all things, it was a visor tear-off that had found its way into the brakeduct. Making the left front brake overheat, causing excessive wear. Had they taken him in right away, they could have removed the visor before critical damage was done and he would have completed the race.

But instead they left him out on track and told him to try and manage the temperatures in the brakes. Meaning he had to turn his pace down to do so. It could not have been a worse decision. I know Kimis luck was bound to run out at some point. But this.. This could easily have been avoided. Pure folly by the Lotus team.

And yet he managed the two best overtakes of the entire race with a stricken front brake. One on Paul di Resta at the busstop and a glorious one in turn 9 on dirty Sanchez. I mean.. Perez. Perez had earned himself a drive-tru for forcing Grosjean off the track. But he is not satisfied and does some insane blocking down towards Eau Rouge and also defending way too late on the Kemmel straight. Kimi is having none of his petty small-minded antics and
stuns him by passing him in a very unlikely place in turn 9. Almost MotoGP like. 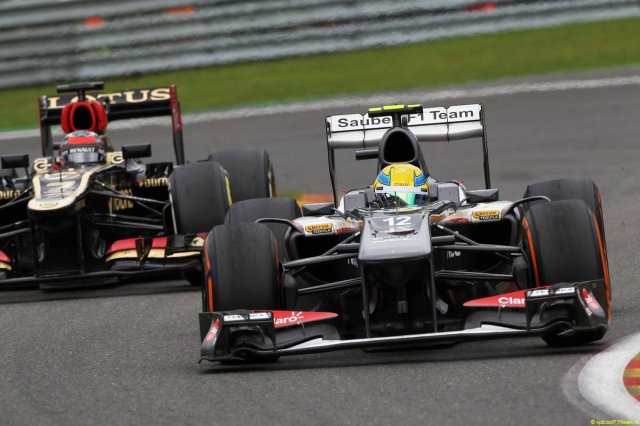 Kimi is on a roll and dispenses of Gutierrez masterfully in Rivage. Not exactly a run of the mill pass either. Just brilliant. He closes in on Massa but the Ferrari is very fast in a straight line. Finally he gets a good tow towards the bus stop for a pass but then its all over. He overshoots the corner by a mile and comes directly into the pits. Front brake gone on lap 25. Race over.
38 consecutive race finishes and a record 27(!) consecutive finishes in the points comes to an end. He gave it a go, provided some fantastic racing with the hand he was dealt and retires by no fault of his own. A shame but a DNF with great dignity on his part.

The rest of the race is pretty straight forward from my point of view. There is an incident, courtesy of yet another numbscull on the track: Maldonado. It’s a 4 car fight between Maldonado at the front, then Gutierrez, Sutil and di Resta. Gutierrez is side by side with Maldonado towards the chicane, does a great pass there as the Venezuelan goes slightly wide. 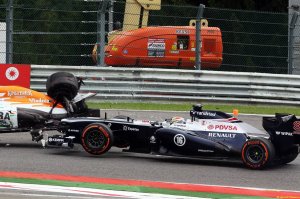 Lets pause for a second. The fight has been going on for a couple of laps, so Maldonado have seen there are more cars gaggled up behind him. What completely baffles me is that he decides to try to go for the pits after overshooting the chicane. As if the 3 other cars had suddenly magically disappeared! He tries once: “Oops! A Force India! Ok, slight contact. No biggie.. Lets try again. Surely, no other cars are around now… Gaaah! Another Force India?! Oh well, bad luck for di Resta. Into the pits I go. Do-be-do-be-doo. I got oil millions up the wazoo..”

Up at the front, Vettel sets a trademark fastest lap towards the end. He is 17 seconds ahead of Alonso when he crosses the finish line. And still with some pace in hand according to him. The season is not going to be as exciting as last year. But I gotta hand it to the kid. He is a quick one. Especially when you see where old rubberface finished in the sister car. More than half a minute behind in 5th place. Nothing less than pitiful. And they seemingly got Ricciardo lined up to replace him? Good luck with that. His teammate Vergne is even ahead of him in the points. 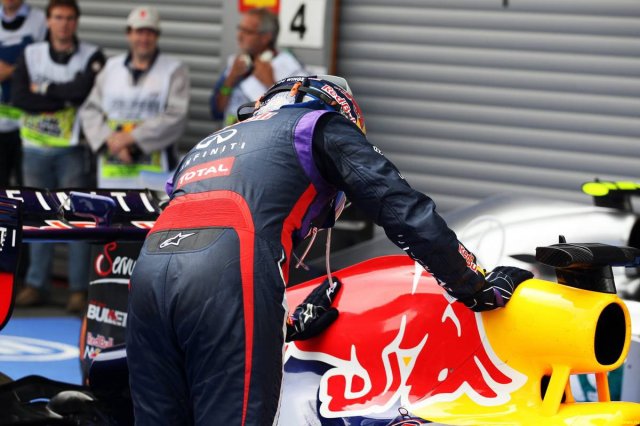 Where will Kimi end up for 2014? New engines and all. I hardly ever speak much about any rumors. I prefer to hear solid confirmation from Kimi or his people. But I will make a small exception here. Judging from the chatter and a very confident Finnish F1 site, Kimi has alledegly signed a 2 year contract with Ferrari. With an option for a 3rd year. You probably ask why on earth he would do such a thing. If true that is. I ask myself the very
same question. And one can debate that all day. I will say that he left Ferrari on good terms with everyone there. One question mark is di Montezemelo. And another is Alonso. Will the Spaniard stay if Kimi really goes to the red team? Those answers will come eventually.

Anyway. Perhaps we will know more when Monza comes around. Until then, stay safe my friends. Enjoy life and some strawberries. They are full of vitamins, you know. 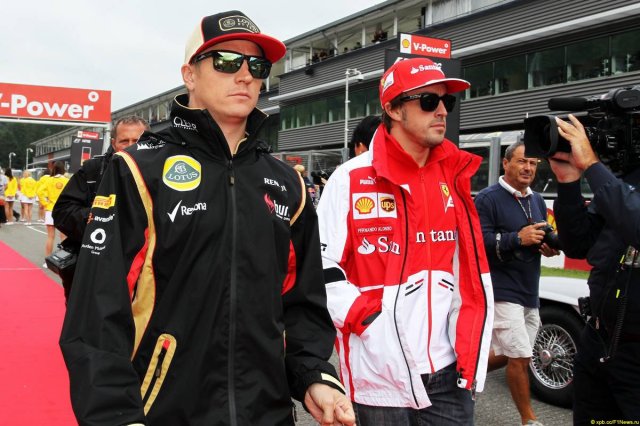 Images ©  Photo4/XPB Images, AUSmotive.com
Do not hesitate to contact me if you need any of these photos taken down for any reason.