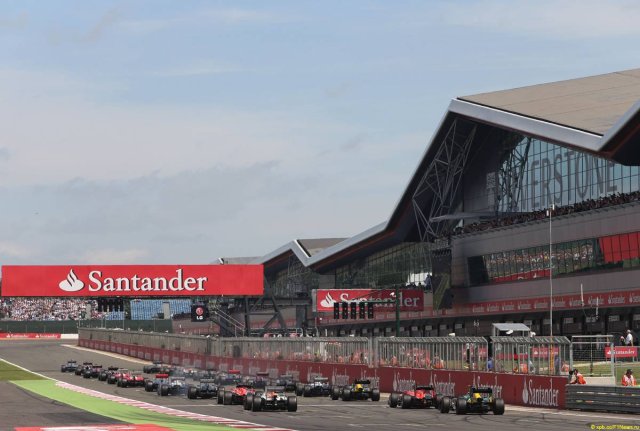 Hey guys. Just a short post on the Silverstone race. I’m about to go on vacation to Denmark so I have to cut it a bit short. And after the result, I was not that motivated either. Even though the race was very eventful in both good and bad ways.

So the Lotus team introduced the “device” or passive DRS on Kimis car this weekend. And some other updates as well. Kimis feedback was that it is an improvement, but not the improvement it was hoped to give. Qualifying once again saw the Lotus problem of heating up the tires. As a result Kimi wound up on 9th (later corrected to 8th due to Di Restas penalty for being low fuelled), while Romain qualified on 8th (7th). Starting ahead of Kimi for the first time this year.

Ferrari had a miserable quali session. Alonso just made it into Q3 and stayed 10th (9th). While Massa started 11th, penalty corrected. Rosberg was 2nd and Vettel 3rd.
Hamilton was the man of the day as he took pole position by the largest margin this year. Almost half a second. Those Mercs sure have some qualifying pace. And their race pace are rapidly improving. Perhaps because of the now deemed illegal Pirelli test in Spain? Penalty was given by FIA. A slap basically. By being excluded from participating in the young drivers test.

Hamilton get away clean as the lights go out. Vettel jumps Rosberg and gives chase to the Mercedes. Mark has another horrible start and finds himself 14th. This time it wasn’t his own fault. He tangled with Grosjean. Which, unbelievably wasn’t his fault either. Grosjean had to take evasive action to avoid crashing into the McLaren on his right. And he made contact with Mark which damaged his wing and sent him down the order. 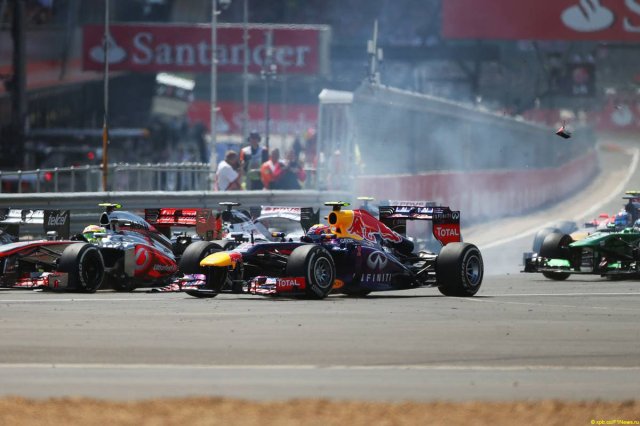 It’s me front wing! Git back heah ya little peddlah. I will git you for thees, Grosjeeeaaan!

As for Kimi, he gets an ok start. He gets up to 6th from 8th.  But is stuck behind Massa who has made a fantastic start from 11th. Alonso has had an uncharacteristic mediocre start and only made up one place due to Webbers misfortune. 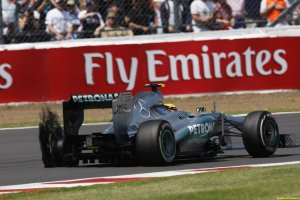 On lap 8 the mayhem that would set its mark on the race, started. Hamiltons rear tire blows up in a spectacular fashion. A real pity since he was looking very strong for the win. To the shocked dismay and anger of the big British crowd. And that anger was directed immediately towards Pirelli. As if they had not been under enough fire lately. It did not improve, as Massa was the next victim to suffer the rear tire failure. Then later, the Toro Rosso of Vergne, then Perez and Gutierrez.

We see Pirelli personnel scrambling back and forth and are quick to state that it is not down to the delamination we had seen before. Instead attention is turned towards the kerbs. Especially the kerb on turn 5. BBC took a closer look at that after the race. And it seems it played a part in the failures:

We have a silly situation happening with the Lotus team on lap 12. Kimi has just emerged from the pits. And Grosjean has been pushing like mad, setting fastest lap to get ahead of Kimi. And he just does. As a result, Kimi being held up by Grosjean, Alonso is able to pass him. This goes on for 2 laps before the team finally tells Grosjean to move over.

Lotus doesnt seem to learn. They did the same thing in Bahrain last year and told Grosjean way too late and Kimi had used up the part of his tires that most likely would have given him the win. Just as he passes Grosjean, Vergnes tire gives way. And the SC is sent out on lap 16 so debris could be cleaned. Kimi actually got chunks of smoking hot tire flung into his cockpit and onto his helmet. And yet the madman just kept his foot down. 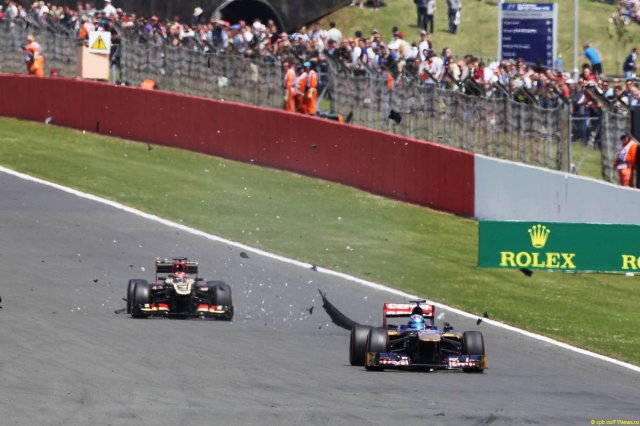 Nevertheless, the race goes on after the safety car period. Vettel obviously took over the lead after Hamiltons big blowout. And it looks like another win in the cards for the WDC leader.

Kimi eventually catches up to Alonso and Lotus makes a great call to call Kimi in early to jump Alonso. Kimi gets out, sets some blistering purple sectors and voila, Alonso is beaten out of the pits.
He is tough to get rid of though, but Kimi gets some unexpected help from Webber coming up from behind and fighting a while with Alonso before he makes his pass. Except now the pressure from behind is Webber. Kimi is in 3rd position though, and looks set to get a nice position.

Lap 41, Kimi goes up to 2nd. This time it’s due to Vettel losing his gearbox and slowing to a halt. To the delight and cheers of a lot of people in the grandstands. The car stops in such an inconvenient place on the old start/finish, that the SC has to be called into action again. And what happens next is what really grinds my gears – much like they grinded in Vettels car. Lotus has at least half a lap to make the call to pit Kimi or not. Meanwhile, Rosberg, Webber and Alonso all pit. For some reason, Lotus chooses not to pit Kimi. Something that baffled him afterwards:  http://youtu.be/xx5Dy8lCy5Q 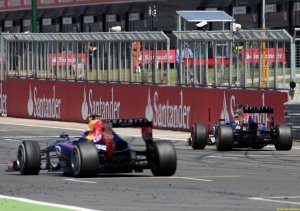 And the teams response is, “I dont know, Kimi.” Oh great. Thats comforting. What are they paying all the strategists for then? Because of this he is on tires that are 15 laps older than his competitors. He puts up a great fight. But the wear of the tires cannot be ignored. And Alonso, Webber and even Hamilton gets by and demotes him to 5th. He felt that decision cost him 2nd place easily. This is one pissed off Kimi after the race:
http://www1.skysports.com/watch/video/sports/formula-1/8799673/raikkonen-team-made-wrong-call

Anyway, Rosberg is the first man across the finish line for the second time this year. Race pace and tire management have improved significantly for the silver arrows. Webber follows suit and Alonso in third showed how much better the Ferrari is on race pace. Congrats to young Rosberg. Even if he had finished behind Vettel without his DNF, he sure kept up pretty good with the Red Bull before that. Could he turn into a contender this year? Perhaps. It would take just a little more performance from the car and another Vettel DNF. It’s a long shot but you never know.
One thing is for certain, they have definitely leapfrogged Lotus on race pace. Lets hope Lotus can still extract more from their updates. And lets hope the teams do not boycott the German GP. I need my F1 fix. And the Germans have been pulling out the big PR and are expecting a Vettel win there.

OPINION ON KIMI AND RED BULL

Time to turn our attention away from this race. To Germany nest week? Sure. But first, the hot topic of where Kimi will race next year. Both Kimi and Red Bull have acknowledged a serious interest and also talks. And Steve Robertson has even said there there is interest in Kimi for next year from McLaren. Whatever that means.

Listen, I get that many people want Kimi to stay at Lotus. They have been fabulous. They have given him a dream comeback. A perfect team to make a comeback with. Its not a top team but they have had a good enough car to challenge for podiums and even supplied 2 wins. Had he started in McLaren or Red Bull, it would have been more difficult and any good performance is merely expected more than it is praised. They have also been good to Kimi in catering to his needs. Less sponsor days and so on.

But lets get real for a moment. We also need to look at the many team blunders the past one and a half years. Blunders that top teams seldom make. Botched up and slower pit stops as well. Its incredible what they have done with the budget they have – but a reality check tells us that F1 is also an arms race. And to win that arms/development race, you need resources. Something that Mercedes, Ferrari, McLaren and RBR all have. Thats why Ferrari can turn a dog handling car into a winning car over the season. Same with McLaren. And its also why Mercedes is becoming the major threat to Red Bull now.

So, if Kimi wants to have a winning car, I am absolutely convinced that he has to change team now. Of course, you can never know in F1. But there are big rule changes for next year. And we all know that Adrian Newey is a fox to find performance in places that others don’t even think of. Until they see it on his car. I would even take McLaren over Lotus even if Red Bull is my preferred choice. McLaren may be in a slump now. But you can never count them out. Especially when they have already begun to focus and develop the 2014 car.

Where are you going, Kimi?

As for the sceptics saying that, “oh, don’t put Kimi in Red Bull. Its built around Vettel. He owns that team. Kimi will be number 2 just like Webber.” To that I say, baloney!
Sure, Vettel is a 3 time champ and the team will obviously tend to meet his needs. But there is not a shred of evidence that Webber is a number 2 in the team. I have said this many times – but if he truly was a number 2, why on earth did the team desperately try to keep Vettel from overtaking Webber in Malaysia. They would have just asked him to move over. But they didn’t. Fact is that they have always been allowed to race. And they also have the finances to keep the cars to both drivers liking. Besides, you really think Kimi and the Robertsons wouldn’t have covered all bases in a contract?

I am aware it could backfire. Kimi might need extra time in getting the car to his liking. But I would still rather see him in a winning car. I know there are new blood in Lotus now. New owners have bought into the team and are making big promises. Promises that they are sure Lotus will be on top. Those are big words. But talk is cheap and now that the only designer that could challenge Newey is gone, I have my doubts. Lotus plays it down but James Allison was worth his weight in gold.

Thats my opinion and I am sure we will know more before August. I have to add, that even if he stays at Lotus I will be happy just to be able to see Kimi racing. Even if I will be a little disappointed. But Kimi knows what he is doing. So I’m glad he is making the call and not me. By the way – Lotus got a home run with their Twitter hashtag this weekend: #GodSaveOurTires.

Enjoy the summer. Do a good deed. Maybe also pet a dog. But not if you don’t know the dog and it is tied up. It could bite you know.

P.S. This is where you find the chilliest Kimi community on FB: https://www.facebook.com/groups/kimifanclub/

P.P.S. I guess the review wasn’t that short after all..

Images ©  Photo4/XPB Images
Do not hesitate to contact me if you need any of these photos taken down for any reason.