Isn’t it strange how things sometimes go your way. And other times no matter what you do, things just doesn’t. Looking at the Bahrain GP, this seemed to be the case more than usual for an F1 race. Exaggerated if you will. There were some definitive winners and some definitive counterparts. One thing is for sure, it was full of surprises and entertainment.

My Race Rating off the bat is an 9 out of 10. I have not been very good at putting that up
lately, so this way I have at least remembered that 😉 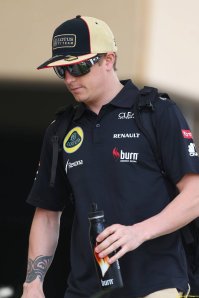 A lot of promise and pace was shown from the Lotus in the practice sessions. But Q3 was a huge disappointment for Kimi (and his fans). The only driver unable to improve his Q2 time, he found himself in 9th. Boosted to 8th after Hamiltons gearbox penalty. It was not an impressive display and it left me void of all hope for the race. Yes, he came 2nd from 11th last year, but that was with some fresh soft tires to spare. This time around there were none of those left.

Mercedes on the other hand bagged another pole position. Thats two in a row and Rosberg taking the honors this time. I think the last time Mercedes as a team had two poles in a row was with Fangio and Moss, 55 years ago or something. See – thats some serious history repeating right there. Behind him, Vettel and Alonso lined up. Both Force Indias had an impressive qualifying session as well in 7th and 8th, 5th and 6th penalty corrected.

As the lights went out, Kimi had a much better start than China. Looking at the onboard however, there was still a whole lot of wheelspin. If that was down to the clutch setting still not being perfect or just an effect from being on the dirty side is unclear. He manages to keep his position through the first turns while Vettel is reclaiming his 2nd position from Fernando up ahead. And this was done in the turn 4, 5, 6, 7 combination.

And I will say this now. Tilke really nailed it in that section. Some great racing and overtaking were seen in those corners pretty much from the first lap to the last. As for the race as a whole: I don’t know how many races you have seen with scraps and close battles on nearly every lap, but this was my first. People are bitching about the DRS and the tires and whatnot. Sure, I get the arguments. I do. But grant me a favor. Go back and watch a race from 2008 from start to finish and tell me what you prefer. If you say 2008, you are lying.

All right. Kimi is up to 7th after Sutils puncture after touching with Massa, but is passed by Button down the main straight. Shortly after even Perez passes him and he is down to 9th. I call myself an optimist but when it comes to racing, sometimes the pessimist just take over and I was ready to turn off the TV by then. If not for the glorious battle at the front, I just might have. And what a numpty I would have been then.

Rosberg, who was seriously fast in qualifying is already struggling after a couple of laps and Vettel is all over him for the lead. The difference, of course, is about 160 kilos of fuel. Little Mercs don’t like that. They prefer to be light and fluffy. Being fueled to the brim, they clearly gnash on their tires in an alarming rate. And more so in Rosbergs case. Lap 3, turn 4. Rosberg defends the inside, but Vettel taking a better line and with so much more traction than the Mercedes, he takes the lead of the race. Again, I want to point out the firm move that Vettel made on the first lap on Alonso for 2nd place. All you people saying Vettel can’t overtake – just shut up. 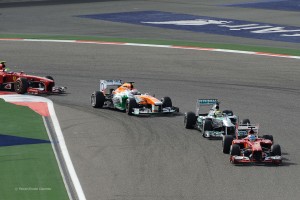 Lap 5 was the start of Alonsos troubles. He is one of the people that I mentioned at the start. It was not his day. Rosbergs neither. Anyway, I see his DRS wing is open and apparently stuck in that position. Til now he has had front row seats to the battle for the lead and has just passed Rosberg and is poised to take up the hunt on Vettel. Instead he is called into the pits where some hi-tech measures were taken to correct the problem. Or perhaps it was just a couple of Italians banging on the wing to get it to close. Out he goes and tries the DRS – twang! Stuck again. Back in. Same sophisticated fix and sent on his way. This time with instructions not the use the wing for the rest of the race. Not the best scenario when you find yourself in 19th with a load of cars to pass. Thankfully for him, a strong headwind on the straight made the slipstream effect even bigger.

Meanwhile, Kimi is suddenly in the lead as everyone is pitting around him. Just briefly though, as Vettel soon catches and overtakes on new tires after his first stop. Clearly a 2-stopper for the Finn then. I guess the afternoon might not be so bad after all, I say to myself while reaching for a salty licorice. He stops a couple of laps later on lap 16 for the harder tire.

Rosberg continues his sad slippy slide down the order. And it gets him in a fighting mix with Button, Massa, Grosjean and Perez. This scrap goes on and on. Through two pitstops and beyond. Massa drops out of the fight due to two mysterious “punctures” as Pirelli insisted on calling them. Looked more like the tire coming apart to me. The word now is that it was debris. Romain slowly makes his way through the pack as well, clearly having found something in the car he had not before.

The thing that really hit me with this race, was the nature of the fights. It has always been that once you have been passed, its sayonara. The person ahead is gone. Not so here. We see Perez doing a great pass on Rosberg in the turn 5-6 left-right combination. Ok, awesome. And on the next lap, Rosberg does the exact same thing and retakes the position! Lolwut? Well, I ain’t complainin’. Eventually both McLarens gets past the Mercedes and this set the stage for a McLaren teammate battle that would last for half the race.

Best teammate fight I have ever seen. Mostly because of the period of time it went on. Back and forth. It was a bit rough at times as Button also made clear on the radio. However, he was able to dish out pretty good himself judging from this clip:

Whitmarsh’s words to Perez about using more elbows after China certainly worked. But perhaps he should also have said “Exept your teammate”. Well, he obviously didn’t. And for that, we the viewers, thank him 😀

Another man on the up is Paul di Resta. Having a great race in the Force India. Going on a 2-stop strategy he was clearly in the hunt for a podium. Even passing the 3-stopping Grosjean at one point. The same could not be said for Mark Webber. He is looking more and more lost inside the Red Bull car. His teammate is half a minute ahead of him completely controlling the race and he can’t even keep up with a 2-stopping Lotus on old tires. Of course the driver of that Lotus may bear some significance to that. But still. Bottomline is – he sucks. In case I wasn’t clear. Webber underlines this fact by doing a violent signature “Webber-chop” right into the side of Rosberg in Turn 2. Oh bravo. Well done. You were thirsty for more after ramming the Toro Rosso in China? Why dost thou plague mine eyes with such foul crappiness??

Okay, on to better things. Kimi has just made his final pit stop and while setting the fastest lap of the race and overtaking Perez, he questions his team on the radio why they made him stop so early since the tires were still good. Epic. They do their best to calm down the allergy-plagued and clearly angered Iceman. And while doing so he overtakes the Mercedes of Hamilton in the final corner. Kimi doesn’t like to wait for DRS.. Ain’t nobody
got time fo dat! Kimi P2 after Grosjeans final stop.

A bit further down the order there is a great fight between Webber and Hamilton. Hamiltons car coming more and more alive as the race went on. He gets the pass in turn 4 – like taking candy from a very large whining baby. Webber does get him back and the fight went on to the final lap where Hamilton finally got the better of the Australian has-been. Enjoy it while you can:

Meanwhile, Alonso has passed Perez. But with the Mexican Slim brothers watching from the pitlane, he is not giving up without a fight. He literally muscles the Ferrari off the track after turn 4, keeps his foot down and takes the position. Superb racing! And this with a piece of the front wing missing. And if that wasn’t enough, he even catches and passes the Red Bull of Webber too. What a drive and way to answer his critics. 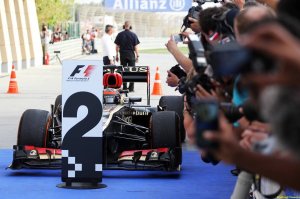 To round it off, Grosjean was catching Di Resta in 3rd by 1 second pr lap. Eventually he got the job done and suddenly we have another piece of history repeating itself. Vettel leading, with the 2 Lotus cars rounding off the top 3. Vettel crosses the line, completely untouchable today. Kimi a well deserved 2nd place, still very much in the hunt. Only 10 points behind Sebastian. Grosjean will be relieved with his 3rd place and can pat himself on the back. Which I am sure he will. Perhaps with a comment on how he was faster than Kimi. He likes to do that.
By the way, it is only the third time in F1 history that the podium has been the exact same 2 years in a row.

What a great and strange race. And I learned lesson learned to never doubt the Iceman. Vettel was clearly the man whom nothing could go wrong for in Bahrain. Now there is another 3 week break ahead of us. May I suggest filling it with some poetry? Maybe some Yeats? Take a trip to the park. Eat an Icecream and enjoy life. I’m out.

“This rosewater tastes horrible, but is doing wonders for my allergies!” *glugg*