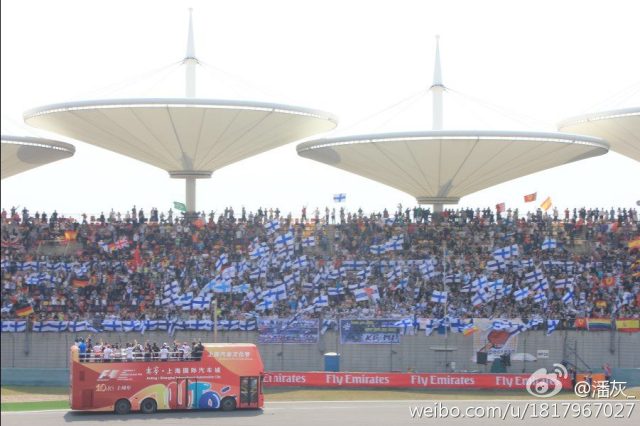 After the longest 3 week break in modern history, we are finally in China. Home of the craziest Kimi fans on the planet. My hat is tipped to each and everyone of you. Keep it up. Except the stalking. Don’t do that. Not like this: http://v.youku.com/v_show/id_XNTQxMTAwMDY4.html

Otherwise the measures to protect Kimi will be too extreme: 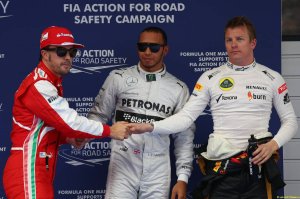 Let us just jump to the good stuff first. Then I will touch briefly on the bad stuff. Kimi wrestling a front row starting position out of the Lotus was nothing short of outstanding. P2 was probably all that was to get from the car. Confirmed also by Boullier who was very impressed with Kimis lap. The car was really struggling in the 2nd sector. Up to half a second slower than the best cars and rivals. Kimi knew this and he made up for it with a blinding first sector. 24.6 was mightily fast and was a big part of getting the P2. Especially since his sector 2 was 3 and 4 tenths slower than Alonso and Hamiltons S2. Even more impressive when Kimi was the very first to go onto the track in Q3, when the track improves a little bit after each car and is fastest at the very end..

The bad stuff is the semi-sad spectacle that qualifying has become. Almost 3/4 of Q1 had passed before the first car came onto the track. Same thing with the other sessions. Tire saving is the name of the game. And the icing on the cake was seeing a 3-time champion not even setting a time in Q3 and instead gambling on another tire strategy and saved rubber. Same with Button. He set a time but was just idling around the track half a minute slower than the rest. Understandable considering the current tires but F1 is still a travelling circus if you will. And people watch it mainly for the show. So I wonder what measures are in the pipeline to prevent this from happening in every quali session onwards. 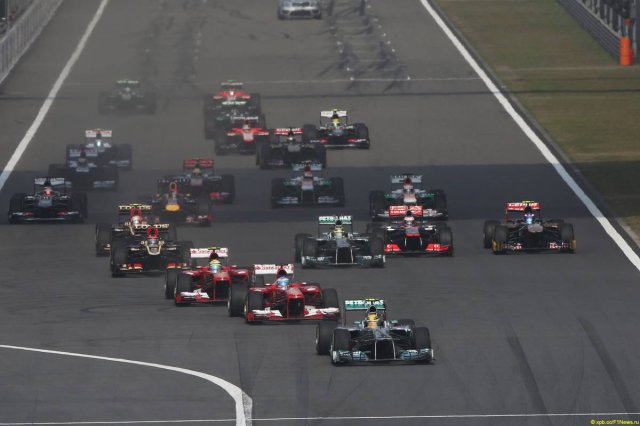 The lights are coming on one by one and every fan are hoping all they can that “their” driver gets a great start. This time around that is not the case for Kimi. He suffers wheelspin and has to defend heavily from Rosberg. Both Ferraris gets by him and he slips down to 4th. I had already expected Alonso to jump him since he was on the cleaner side so just losing one more position with a crap start could have been a lot worse. Still, it did compromise his race a bit. As it turned out, the team had told him to go to another clutch setting on the warmup lap. Kimi had wondered why since he was happy with the current setting but applied. And that was that. Which is why you heard Mark Slade apologizing on the radio after the race.

A fairly clean first lap as the cars settle in to their positions. Mark Webber who started from the pit lane due to a penalty is called in on lap 1 to get the softs over with. On lap 5 Hamilton loses his lead not only to Alonso but Massa as well. In the same corner. Kimi almost makes the pass too. Hamiltons tires seriously fading, he makes his pit stop on lap 6. To my slight surprise, Kimi comes in for the mediums on the very next lap. So does Alonso. And its the usual story. Ferrari gains one free second just on the pitstop alone. Kimi just manages to crucially stay ahead of Mark Webber.

Gutierrez acts as karma payback for Sutil in China as he uses his Sauber to glass Sutils Force India from behind. Take that! Now your rear wing is weird. Go back to the pitlane and burst into flames. Yes, like that. A grid penalty for the next race, you say? Oh well. Worth it! Or not…

My work here is done..

Hamiltons early pitstop keeps him ahead of Kimi, so staying out any longer on the softs would have been a big mistake. As illustrated by Felipe Massa that pits the lap after and is therefore jumped by Kimi. But Alonso is served first. The top three are making their way up the order through the cars that are yet to pit. Kimi does a beautiful pass on Vergne on the outside in turn 1. Observers report Kimi braking noticably later than his rivals. His entry speed into that turn was immense. The Iceman earning his nickname.

Lap 15 we get served the douche of the day. Webber who dives straight into the side of Vergne and destroys his own front wing. Vettel has just come out of the pits behind his teammate and has front row seats to the lunacy. I could almost hear him grinning inside his helmet.

On lap 16 we have the Kimi-Perez incident. As much as I would like to slam Perez for the coming together I just can’t. I have watched the clash back and forth and Perez is only holding the racing line, nothing more. There is no defensive move or line taken in that turn 5-6 sequence. Perez is ahead and has the racing line. Kimi tries a far too ambitious move on the outside which I really haven’t seen work before. Perez is that much ahead, that there really is no reason for him to give room to the Lotus and Kimi was lucky to escape with just hole in the nose of the car and a few bits on the wing. So it’s not all bias here my friends.

Kimi gets past him in the DRS zone where he should have made the pass in the first place. Oh well, he was pretty much inch perfect in all his overtaking moves last year, so a little error will occur from time to time. With Kimi, it is thankfully a seldom occurance. Meanwhile, Webbers car loses its wheel Alonso style, Hungary 2009. Thankfully a slow corner so the cars around are able to dodge it. A weekend to forget for the Australian then. Perhaps it is time to move on to Porsche?

Kimi has caught up with Hamilton but just can’t find a way past. The damage likely the cause of that. Luck has it, or the lack thereof, that they pit on the same lap, and emerge in the same position on lap 22. This happening, coupled with the damage to Kimis car, took away his chances of challenging Alonso for the win. And I believe there was a very real chance. At this point there were only 5 seconds between Kimi and Alonso after their stops. Lotus did the numbers after the race and said that the damage cost Kimi about 0,25 seconds per lap. So hypothetically – HAD Kimi not made the mistake with Perez and HAD he come out in front of Hamilton, then Alonso would have had to fight off Kimi to the end. Without a doubt. And Alonso might have failed to keep him behind too. It’s hard to say though as the Ferrari was very quick yesterday.

But – we live in the real world and not in the world of ifs and buts. And yet it is not that bad a place to be. I am getting ahead of myself, but all things considered, 2nd place is a cracking result. He still sits pretty in 2nd place in the standings, only 3 points behind Vettel. And we have Bahrain coming up. I want – scratch that, I NEED to see a Kimi-Vettel rematch. Hopefully for the lead and the win this time arround as well.

Allright, back to the race. As Kimi and Hamilton fight it out, Alonso increases his gap to them lap by lap. Vettel is running his own race and is leading at one point before Alonso passes him just before his pitstop. He then has a long 20 lap stint on mediums before a final short obligatory stint on the softs. And this is where, once again, Vettel provides some first class entertainment in the final stages of a race. Say what you will, but I’m not complaining. I will get to that.

Kimi, still being behind Lewis, pits on lap 34 to try and undercut Lewis. The Mercedes, not as good on tyres as the Lotus, is forced to stay out 3 laps longer. By the time the Mercedes pits, Raikkonen is comfortably ahead. And we get treated to a replay of another stunning pass by Kimi on the outside in turn one. “A world champions move” as Martin Brundle dubbed it.
Hamilton continues to put hard chase to the Lotus and Kimi calmly responds by keeping him just out of using the DRS. He dips under the one second gap a couple of times but Kimi ups the pace a little and gets him out of DRS range.

This goes on until just 2 laps before the end. Then Lewis has to switch his attention to behind him. Vettel has pitted for softs and is told by the Red Bull team that he is allowed to gun it. And gun it he does. He is about 14,5 seconds behind Hamilton after his stop with 5 laps to go. He gains about 3 seconds just on the next lap. And then 3 more. From thinking he was way too far behind to pose any threat, he is suddenly breathing down the neck of the Mercedes. It’s an awesome display and a welcome sight to see a car go absolutely flat out instead of conserving either the engine or the tyres. Thank you once again Vettel!

The German gets one chance on the final lap to take 3rd place from Hamilton but he just overshoots it and brakes too late into turn 11. This gives Hamilton enough of a gap on the back straight to stay ahead. Otherwise he would have been easy pickings for the charging bull. An exciting end to a very decent race. Alonso crosses the line to win it and Kimi follows after. Hamilton gets the final podium slot by the slimmest of margins from Vettel.
Again, great stuff.

I know Alonso drove a great race and won. Kudos to that. But Kimi Raikkonen really stands out in how he soldiered on and raced a stricken car to 2nd position. Kimi definitely likes a strong front end and it must have been a real battle keeping the speed in that car. Especially on a track like Shanghai. But somehow he did. Now, we saw the true pace of the car in Australia. That will happen again in Bahrain, Im sure. The car is good. No doubt about it. So no wrong clutch decisions from the team and no rash overtaking maneuvers and the E21 will be the ghost of the mighty MP4-20 in the hands of the Iceman. Keep the faith, Raikkos. I’m out. Peace!

Wanna hang out on the best darn Kimi group on Facebook: http://www.facebook.com/groups/kimifanclub/ 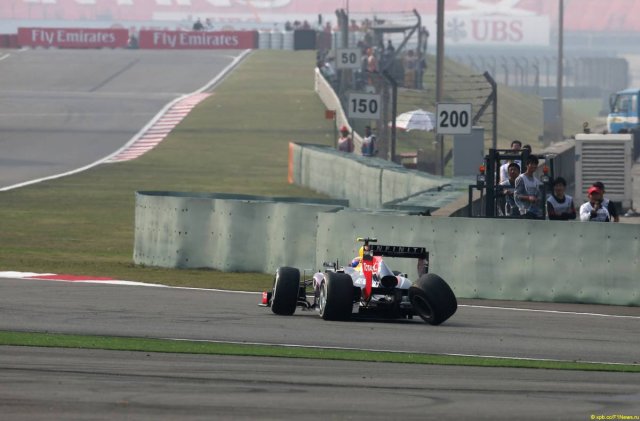 I will show them how to get a podium from the pitl.. Crikey! My wheel!

Git back heah ya little peddla!

Wot a clackah. Marko, you will pay for thees!