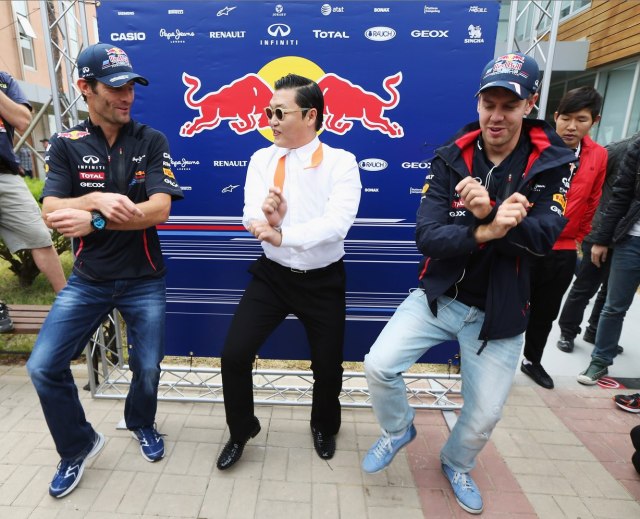 So just a short review this time as the race was bittersweet for me. I will still attempt to make the review as entertaining as possible though 😀

The new coanda-style exhaust fitted to Kimis car this weekend got our hopes up for a clawing back of lost ground. And it looked promising in Q1 as he went through without having to resort to the supersofts. Q3 saw Webber take a surprising pole position. Vettel thought Massa was going into the pitlane and it lost him some speed onto the start straight and probably some concentration, as he didnt improve on his second run. Kimi lined up a strong looking 5th place and the stage was set for a thrilling race.

Lights out and its a very short run down to turn 1. Vettel takes the lead in a suspicious manner. Webber looked to be off to a good start and yet Vettel managed to overtake him almost immediately. Down the very long straight there is slicing and dicing all over. Webber appears to fight back but yields at turn 3.

I also noticed Alonso making a crazy cut across the track towards Kimi after the lights went out but quickly thinks better of it. The memory of Suzuka probably still in the back of his mind. Kimi is side by side with Alonso and Hamilton down the long straight. But the Coanda exhaust takes a little bit of power away and that is bad news against the Mercedes engine in Lewis’ car and the Ferrari in Alonsos. Kimi comes out ahead of Lewis in turn 3 but doesnt close the door. He should have taken the racing line and forced Lewis to go wide. Instead he leaves it wide open for Lewis to out accelerate him down to turn 5. It has to be said that Kimi did also struggle with traction out of corners after the start.
So Hamilton has the inside at turn 5 and does what Kimi should have done earlier, he forces Kimi wide and takes his position. With no runoff at this point, Kimi loses some momentum that enables Massa to pounce and relegate him to 6th. Oh dear. 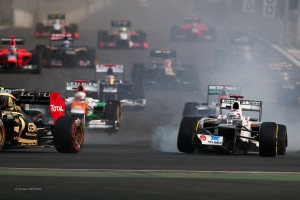 Rewind a bit and we see Kobayashi putting his F1 seat in jeopardy for next year. He brakes too late into turn 3 and manages to take out both Button and Rosberg in the process. Button immediately and Rosberg a lap later due to damage from the impact. He pulls into an opening at the end of the straight. The car is still partly on the track which brings out the yellows, meaning no overtaking and no DRS allowed. This goes on for almost 8 laps before the car was removed! Immense Korea race track fail!! Add that to the fail in putting the pit exit right into the the turn in for the first corner.

Anyway, Kimi closes in on Massa and looks set to give him a run for the money. But there is not enough oomph in the Renault engine to get by him in the DRS. They happen to pit on the same lap as well, so any chance of a jump through a pitstop was lost there. Further troubles as the pair catches up to a Sauber on worn tires. Massa makes it past suspiciously easy whereas Kimi is stuck behind Perez for an entire lap. He makes a good pass down the straight next time around. But Kimi has now lost 2 seconds of ground up to Massa. Ground that he would never recover.

But if you can – have a look at Massa passing Perez and then Kimi passing him. Massa came from way behind and Perez didnt make any defensive moves, left loads of space on the inside for the Ferrari. As for Kimi – Perez makes a very late jerk towards Kimi after he saw he went for the inside, and when he has passed he was trying to come back at him but realized his tires were too worn. That came across as a bit strange to me.

Moving on. Massa has caught up to a struggling McLaren and makes his way past him with no drama at all in the DRS zone. Something is clearly not right in the silver car. Kimi is up next – he should dispose of the McLaren easily. Well.. No. Not in the slightest. He does get a very good chance on lap 23 though. He catches up with his DRS wide open down the straight. But instead of going on the inside – where there was plenty of room – he opts for the outside. Result: Hamilton just sticks to his racing line and squeezes Kimi wide. Chance lost. And it almost seemed like Hamilton gambled, or rather took advantage of Kimis fairness. Knowing he always races clean and often backs out before contact is made. Kimi – its time to just kick up the toughness a bit. Please. I know this is easy for me to say – the armchair expert. But I do fear that he is being a little too fair at times. Although, Fernando did gamble on that in Japan and it cost him dearly. Muahahahah! 😉

Next lap – Kimi goes on the outside again. This time he gets past! Or wait. No, he doesnt. Hamilton saved his KERS to fight back and having not covered the inside properly, the McLaren is able to squeeze the number 9 Lotus wide yet again. By now I am feeling pretty frustrated so I can only imagine what Kimi is thinking. This dance goes on for a number of hilarious laps. Meanwhile Massa has disappeared into the distance. When the McLaren finally pits, the Ferrari is 10 seconds ahead… Hulkenberg behind is 13 seconds adrift. So with half the race gone, we get a sense that it will be a lonely second half for the Iceman. Yay.

So with that in mind I will switch to a couple of other key incidents. First one being that Massa has really caught his second wind and is rapidly closing the gap to Alonso. The little Cocker Spaniard doesnt like that and has Rob Smedley tell his driver that he is too close and “back off from Fernando. Keep the gap at 2 or 3 seconds. Good boy”.
The next little snack is the overtaking move of the race. Courtesy of Nico Hulkenberg. Grosjean has caught up to the still struggling Hamilton. His woes turned out to be caused by a broken anti-roll bar. Behind them the Force India of Nico Hulkenberg is lurking. Grosjean gets only halfway past the McLaren. Lewis does his squeeze move but Romain just runs wide and continues racing side by side down towards turn 4. Hulkenberg sees his chance and goes on the outside around both of them in turn 4. Hamilton has the chance to sqeeze him out but thinks better of it. Probably because he saw it wasnt Kimi.. :p And Hulkenberg then has the inside for turn 5 and makes it stick. Beautiful!
Vid here. Ad first:
http://www.myvideo.de/watch/8804960/Huelkenberg_double_overtake_on_Hamilton_and_Grosjean

Another bit of drama was Rocky coming over the team radio to Vettel. Telling him for the love of God to take it easy. And that his right front is almost down to the thread. Vettel reassures that he is saving the tires. Although live timing tells the story of him setting a personal best lap.. His race engineer comes on yet again and pleads with him to really take it easy in the braking zones. And that he wont know when the tire suddenly fails. He complies by setting green sectors here and there. Are Red Bull just trolling or is this for real? Seems real enough. They sound genuinely worried.

Next nugget is another Yeongam track fail. Hamilton goes across the astroturf that has been broken up during the race. And a large piece, 2-3 meters worth or so is ripped off and stuck to his floor! Another setback to the ailing McLaren that has slipped down to 10th. It looks comical but Im sure its no joke for the driver.

There are still frequent messages coming through to Vettel, begging him to take it easy. Right up to the final lap. Vettel responds by setting the fastest S3 of the race. Apparently he just doesnt care. Lol. Well, he probably wanted to keep the temperature in the tires. He crosses the line in first place for the third time in a row and takes the lead of the championship. It’s on now!

So, a very anonymous race for the Kimster. 5th was what the pace allowed today. Kimi is still 3rd in the championship. There are race winners all around him in the standings. All the way down to 7th with Rosberg. Impressive in its own right that he is 3rd with no wins. However, he is 48 points adrift of Vettel now. I think the book on championship hopes has to be closed. Unless Lotus does some miracle work with the Coanda exhaust that brings them on par with Ferrari and Red Bull in India. And McLaren, dont forget. The DDRS? I will believe it when I see it. Right now, they are the 4th fastest car. Still, no matter the outcome, there is no doubt that Kimi has silenced every doubter out there. As for this race, I am pleased it is over, because it was painful to watch at times. On the other hand I am glad to see Vettel top the standings. It is thoroughly deserved on his and Red Bulls account.

Every doubter except for Antonio Lobato of course, who is a deranged commentator for La Sexta that worships the ground Alonso walks on. His favorite passtime is slating Kimi. Calling him things like an amoeba, dumb and other choice words that is really becoming and classy for a “journalist” on a TV network. But enough of that now.

Small minded pathetic people excluded, anyone with common sense has seen and appreciated Kimi deliver epic racing during his first season of his comeback. Aggressive moves, always fair (although a little too fair this weekend imo) and lightning speed like in Bahrain and Hungary for instance. Lets hope for more of this in the final stint of the 2012 season! Yea, boiii! 😀

Images © Korean GP/Sutton, Clive Mason/Getty Images, WR12/Nextgen-Auto.com,@photo4/motorionline.com
Do not hesitate to contact me if you need any of these photos taken down for any reason.