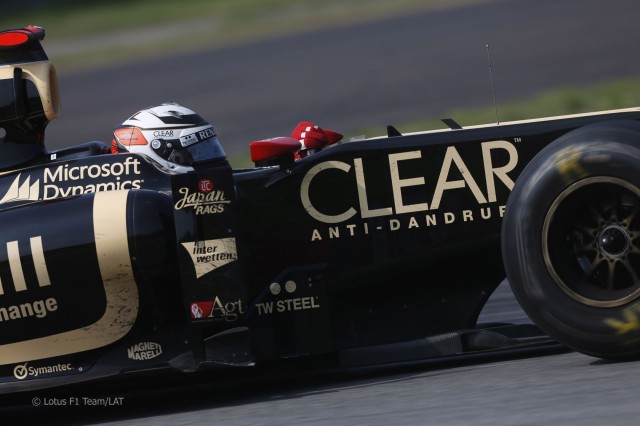 Hey guys. Just a quick review this time. I have really gotten into the Breaking Bad series lately and I hear it calling for me 😉
So – we suspected that the Lotus would struggle around Monza since it had problems in Belgium. And qualifying gave us confirmation of that.

The biggest shock of Q3 was seeing Alonso down in 10th. They had looked strong all weekend. Even if they tried out some slipstream antics which I thought was pathetic. I suspect that Ferrari probably put in more money and more effort into the Monza package than any other team. Just because it is so important for them to win in front of the tifosi. And if not for Alonsos problem with the rollbar, he would most likely have been on pole.

As it was, Lewis benefited from that and secured pole position instead. What about Kimi? Well, 8th position shows that the problem was even worse here than Belgium where he qualified 4th. Due to a penalty for Paul di Resta, Kimi moved up to 7th on the grid. Could he work some Kimi magic?

When the lights go out, its a long run down to the first chicane. Amazingly, no incidents. Massa jumps from 3rd to 2nd past Button while Hamilton stays in the lead. Alonso gets another good start and is up to P8 after the chicane is dealt with. Kimi makes up one place to 6th and almost gets 5th from Vettel but is squeezed so he has to yield. Alonso does some squeezing himself to keep his 8th place from Di Resta who has to briefly take to the outside of the track in the curva grande.

Alonso gets past Kobayashi and now takes up the hunt for Raikkonen. He passes the Lotus with no drama down the straight. The Ferrari is really flying around here as proved by even seeing Massa up in 2nd place.. Alonso is in 6th now and behind Vettel. Vettel makes a nice move on Schumacher though and takes 4th. Alonso tries the same several times but hits the rev limiter behind the notoriously high-speed strong Mercedes. But finally makes it stick.

It quickly comes apparent that this is not an easy race for Mr. Raikkonen. He keeps up with Schumacher but Perez has started to make his way through the field and is just behind the Lotus. Schumacher pits and gives Kimi some free air but the speed of the Sauber is immense here. And so begins one of the best scraps of the race. Not to mention the most fair. Perez makes a move on Kimi in the second chicane and Kimi defends well and leaves just about enough room for the quicker Sauber. Some brilliant car control from both drivers to not make contact. Great to see even if the pass was the opposite way of what I personally would like. More to come.

Meanwhile Button has caught up with Massa and does a very nice passing move into the second chicane. So its now a McLaren 1-2. Ironically we saw quite a few passes there and before Parabolica, which are non-DRS zones. Kimi however, does make a nice pass on Hulkenberg in the DRS zone while he chases Schumacher down once again. Even if Kimi clearly doesnt have the pace, the race is already shaping up to be more exiting than it has been in recent years.

Next up is the Vettel-Alonso battle. Vettel defends well down the straight. But when Alonso has the speed down to the second chicane, its a repeat of 2011 – just the other way around. Basically, Alonso has to take to the grass with all 4 wheels at about 300kph. And in comparison to last year, Alonso did leave slightly more room than Vettel did. Should Vettel have received the drive-tru he did? Well, the rules are more strict this year when it comes to moving while defending. I dont know. I guess with the way it looked on screen, there was no way that no action would be taken so I will just leave it at that. Not that it would matter in the end as Vettel had to retire 20 laps later.
Incident here: http://www.youtube.com/watch?v=uk3lcrTTPt4

Lap 30 and Perez makes his first stop, shifts to the softer tire emerges in 8th behind Kimi while the Finn is still stuck behind Schumacher. Lap 34 and the second placed McLaren of Button retires due to a problem with the fuel system. And with that his championship chances are slipping through his fingers. Meanwhile Perez has closed right up on the number 9 Lotus and he is looking for a repeat of the previous pass. He gets past but Kimi is not done yet and fights back to retake his position. Great stuff! Kimi does have to give up his position in the DRS-run down to turn 1 where the Sauber is just too fast. But he doesnt make it easy. Defends all the way and yet no contact. Welcome to the school of fair driving and overtaking. I could think of a couple of people who should enroll immediately.
Its not fun to watch Kimi being passed by the Mercedes of Rosberg as well. But he is 2-stopping so Kimi has to be smart and keep his tires alive for 15 more laps.

We then start to hear some strange team radio from Ferrari. Telling Massa to manage his tires and oh, by the way, Alonso is behind you. And later – Alonso is 0.9 seconds behind, he should get the DRS. Ferrari, team orders are allowed again. You were the team that managed to get them banned and you were also the team that got them allowed again. In both instances by doing things that disgusted F1 fans. But – just say it. “Massa, let Alonso by”. Or does Ferrari assume the fans are stupid? Anyway, its 2 Ferraris on the podium by lap 40. But a little Sauber is out to spoil the party.

Sergio Perez is starting to set some blistering times. He is gaining on Massa by more than a second every lap. Pretty soon he is up the gearbox on the F2012 and he actually makes a pass before the Parabolica! Something that didnt even happen once last year – just on backmarkers.
Now the hunt is on for the second Ferrari. A repeat of Malaysia? Back then Perez had an unfortunate spin. But he is just flying here. Could someone be calling Peter Sauber and offering some free Ferrari engines for next year?
If so, Peter Sauber apparently said “screw you!” to that offer because Sergio overtakes Alonso like nobodys business down towards Ascari and he is in 2nd! Beautiful – and good news for the championship.

Hamilton is even told to up his pace a little to not get too close to the charging Sauber towards the end with 6 laps to go and 11 seconds ahead. Vettel retires on lap 47 and so does Webber after a spin out of Ascari that completely flatspotted all 4 tires, making it undrivable at Monza speeds. Hamilton takes the chequered flag, Perez follows and what has to be a somewhat disappointed Alonso rounds up the podium. The same 3 drivers that was taken out by Grosjean at Spa now stands on the podium. There must be some poetic justice in there somewhere.

Only 15 points to Alonso from 2 strong Ferrari tracks is not good news for the championship leader. And Lotus have said that the coming tracks will suit the car better. With Lotus set to get their Hungary pace back, while McLaren is now looking strong as ever, this has to be a serious worry in the red camp. And even if Red Bull had a terrible weekend, they are also a team capable of finishing ahead of the red cars. So its all to play for. Its Alonso, Hamilton and Raikkonen in the top 3. Just like 2007. Oh – and with the double DRS being put on the E20 for Suzuka, the hope is very much alive for a late Kimi charge.

5th was the absolute best that Kimi could have gotten from Italy. He did incredibly well to keep the faster 2-stopping Schumacher behind him. He said to the team that this was one of the most difficult races. So kudos to him for his brilliant drive. Driver of the day goes to Sergio Perez though. He has shown himself as a rising star. The pace he had for a one-stopping car was phenomenal. He is certainly a candidate for Massas seat. Although I really really wish he doesnt take it. It doesnt matter how brilliant you are. If you are Alonsos teammate, you will not be allowed to shine. Period.

Race rating is 7.5 out of 10. Very good Monza race as they tend to be boring.
Anyway, thats enough from me. Take care peeps. Bring on the race pace for Singapore!

Images © Lotus F1 Team, Andrew Ferraro/LAT Photographic, Sauber F1 Team, Ferrari spa/Ercole Colombo,@PHOTO4, motorionline.com, xpb/F1life.ru
Do not hesitate to contact me if you need any of these photos taken down for any reason.