I realized I havent done a review on Silverstone since 2010, so its high time I provide one. Even if I am on my vacation and feeling a bit lazy 😉 One thing is for sure – it was an interesting race with some key points and events. So lets get to those.

Free practice was pretty much wet all the time and qualifying was no exception. So the teams bolted on the wets and sent their men out while hoping for the best. One guy was disadvantaged right away. Yup. You guessed it – Kimi Raikkonen. This time his KERS decided to call it a day. “Lucky” for him, the wet conditions made the KERS less important so he made it through to Q2. Still, it would have given him about 3 tenths a lap. The big name to miss Q2 this time is Mr. Button. The guy cant seem to catch a break. Normally he favors these conditions. But he cant seem to get on top of his car this year. Such a switch from last year where he really shone.

Halfway through Q2, the rain really started coming down and we hear Alonso crying on the radio and calling for a red flag. Probably because he was down in 14th and out of Q3. Shortly thereafter the session is red flagged. And was halted for 1 and a half hour or so. The rain dies down and the cars rush out again, nearly jumping over each other in the pitlane to find some clear air. Kimi once again digs deep with his stricken car and is comfortably through to Q3. Vettel gets lucky with the last spot in 10th. The croissant that they call Big John decides to beach his Lotus in the gravel and can therefore not set any time in Q3.

For some reason, Lotus decides to send Kimi out on full wets when everybody else is on intermediates. It was obvious from the go that it was the wrong choice. And he pits after one timed lap to get the correct tyre on for the conditions. This unfortunately means that he only has time for one flying lap. A shame since the Lotus needs a little time to get heat in the tires. Another lap would have made a difference as Kimi himself states here: http://www.autosport.com/news/report.php/id/101041

As it is, he still manages a pretty darn impressive 6th place. And that without his KERS working or his tires properly heated, mind you. I may be biased, but that for me was the qualifying feat of the day. Pole sitter was some Spanish guy.

Lets get to it. The sun is shining over the Silverstone circuit for a change when the lights go out. Alonso has to defend from Webber in 2nd place by doing his own version of the Webber chop. So he keeps the lead and Webber stays behind, biding his time instead..

Kimi gets an ok start and places himself cleverly in the third corner. Good enough to put a move on Vettel for 5th place in the next turn. He gets too much over the kerb though and loses a position instead. To who you may ask? Well, to Maldonado unfortunately.. *shivers* By now I am beginning to wonder if this will be Kimis first DNF. 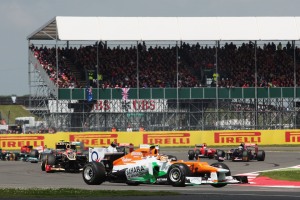 In the same corner, Kimis teammate taps the rear of Paul DiRestas car giving the Scot a puncture and leaving Grosjean with front wing damage. This forces him to pit for a new wing and some new tires. This was not too bad for Grosjean as this got the soft tires out of the way and only having to deal with the harder tire for the rest of the race, which by far was the best tire on race day.

Kimi somehow and miraculously manages to get by Maldonado unscathed on lap 4! Sadly the cameras missed it, but I suspect it was in the DRS zone.
Up ahead, Alonso and Webber are pulling away while Schumacher is holding up a lot of cars. Massa is first in lineto try a pass. He tries to dive on the inside on lap 7 after the DRS zone and only the experience of the German prevented a collision. He was in full right to take the apex full on but gave just enough room to prevent contact. Finally on lap 12, the Baby does one of the best passes of the day in my opinion and takes the position away from the Mercedes.

Another incident on lap 12 that doesnt quite deserve as much praise is Maldonadon’t coming out of the pits. Perez gets a good run on the Venezuelan and tries a move on the outside in turn 6. He shouldn’t have done that.. Maldonado brakes way too late considering that his tires are not fully to temp and goes wide into the Sauber. Result: Puncture for the Williams and a stranded Sauber and one very pissed off Perez. It was another unexperienced move which should have given him a grid penalty. Instead he got a fine and a reprimand. Stay tuned for Hockenheim. Who will be the next victim of the desperado?

Kimi pits on lap 13 and gets the harder tire on. He emerges behind Michael Schumacher. He passes Ricciardo in the Toro Rosso who hasnt pitted yet. Kimi deals with him into the very fast Copse corner. Now he has to close down Michael.
At the front there is an interesting scrap between Alonso and Hamilton. Alonso has just pitted, Lewis has not and he is just clawing on to his lead of the race even though he has to pit soon. Alonso gets the pass done but Lewis fights back and retakes the position briefly before he has to give it up. Fun stuff!

Kimi is now in touch with Schumacher and you can really tell the 43 year old is pushing hard to stay ahead. Sadly he spends almost 10 laps behind the German before he finally gets him lined up for a good pass on lap 24. This allowed Massa in 4th place to pull out a gap of almost 6 seconds. He has closed it down to a little over 4 seconds when the Finn comes in for his final stop on lap 34.

Kobayashi who hasnt pitted yet is between him and Massa and also acts as a buffer before his pitstop 3 laps later. A pitstop that did not go down well. He goes totally Banzai and clips 3 members of his pit crew. None were injured, thankfully, but it did ruin the good race he was having. The incident: http://www.youtube.com/watch?v=HmPDUcOW7Lk

At the front there is drama. Alonso was hoping for a boring race but he is now having to protect his behind from the a charging Red Bull. Webber is on the harder tire while Fernando is on the softs. And they are not holding up as well as he had hoped for. Webber is closing the gap with an alarming pace for the crimson team and with 7 laps to go he is below the one second mark. On lap 48 the Australian gets the job done down the Wellington straight with the DRS open and takes away the lead and the win from the Spaniard.

When Kimi can focus on Massa again, the gap is still around 4,5 seconds. And there is no doubt he is going for that 4th place. He sets a couple of fastest laps in the process, including the fastest of the race. Number 37 for him. He gets the gap down into DRS range with a couple of laps to go but makes a small mistake and goes wide on the second to last lap. He gets right up to him again but there are no more laps and he has to settle for 5th. Still, a great effort. With a little more luck and less laps behind the Mercedes it would have been a much easier task. His teammate does well to finish 7 seconds behind him in 5th.

However, with a better qualifying (I feel I am repeating myself) with no KERS issues and the correct tire choice, I think a podium could have been very possible. The immense pace both the Lotuses had in the race showed that they could do battle with the front runners. A 3rd grid position would have made a world of a difference I think. The pit stop strategy also left me wanting more. But I will leave that for now.

As for the stops themselves, here is some interesting statistics and a look on how the teams are doing when you put all their times together:
http://www1.skysports.com/formula-1/news/25460/7788991/The-2012-Pit-Stop-Challenge

Tricky one. 6 out of 10, I would say. Kick it up to 7 out of 10 for that great scrap for the win at the end. Of course it is an extra delight to see a win taken away from the primadonna. So applause to Mark Webber for that. He kept his cool and preserved his tires just right. It must be a very hard thing for the drivers to do. To push just enough without killing the tires. It takes skill and it is undoubtedly impressive. Unfortunately that is something the majority of F1 fans are not interested in and neither can they follow or properly understand that challenge in any way. But I digress.

Germany is coming up in less than 2 weeks. Long time followers will know that Kimi has had an uncanny amount of dismal races in Germany. Let me just name some:

That was just to numb you from the potential pain. Haha. Hey, don’t worry, he did finish on the podium in 2006, so lets aim for that instead. Til then, stay safe. 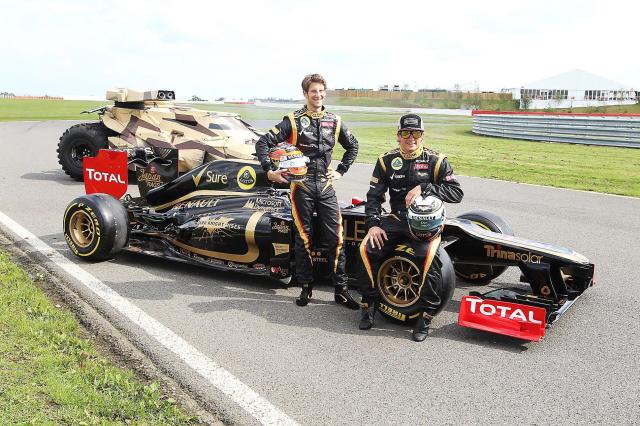 5 Responses to BRITISH GP ’12 – AN UPHILL BATTLE FOR RAIKKONEN