VALENCIA RACE REVIEW – THE WIN THAT GOT AWAY PART 2

My least favorite track is up and I thought I would be a tad quicker with my review than last time. Perhaps the Pirelli era might have an effect on this race as well?

After the failure in Canada with the broken differential that kept Kimi from qualifying well, I had high hopes for Valencia. And he had a fantastic Q1 where he sailed through relatively easy on the medium tire. Q2 was perhaps even better. He only did one proper quick lap on the softs and that was enough to get him to Q3. Quite impressive when you see how incredibly close everyone was. The top 13 were all within 3 tenths of each other. Just try to snap your fingers twice, as fast as you can. That will take you about 3 tenths of a second to do..

Q3 was decent. Although he was unfortunately pipped by his teammate with 8 thousands of a second. That is less time than what it takes for you to blink your eye. A bit disappointing when you obviously were hoping that Kimi would beat Grosjean comfortably. Although it must have been worse for Alonso that missed out on Q3 with 4 thousands of a second. So the Spaniard starts 11th. 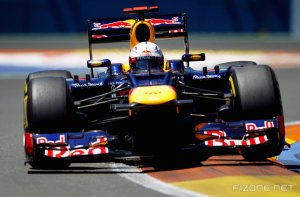 Vettel in pole by over 3 tenths. Which is quite a margin when you see the gaps between the rest of the top 10. In fact, there are once again murmurs over the legality of the Red Bull car:
http://www.f1zone.net/news/latest-legality-rumours-follow-vettels-quali-domination/14644/

Hamilton and Maldonado, 2nd and 3rd. And then the 2 Lotuses. Still, P5 could be pretty promising with a good start..

Lights go out at the Spanish circuit and Vettel gets a trademark start and takes off with an alarming pace. Kimi gets an awesome start as well. Jumps his teammate and is about to pass Maldonado as well. But Maldonado is his own self as usual. A Formula 1 driver with a ton of money as backing from his government and a completely reckless approach to racing. This has been proven many times so far this year. And exhibit no 1 for this race is how he brutally cuts in front of Kimi. Being the gentleman and cautious driver Kimi is, he brakes to avoid an incident. Result is that he slips down to 6th instead of claiming the 3rd place that rightfully was his after his stellar start. 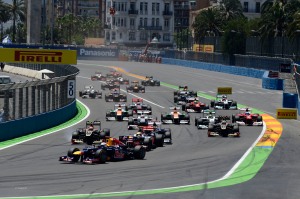 He keeps his head down trying to get past Maldonado. He has an attempt shortly after the start but wisely backs out knowing what a loose cannon the Venezuelan is. Meanwhile, Grosjean is able to pass the McLaren of Hamilton to take 2nd place. A couple of laps later, Kimi gets in a brilliant move on Maldonado to take 5th place.

At this point Alonso has somehow made it up to 7th. He even passes Maldonado for 6th just prior to Kobayashi, Kimi and Malicious Maldo pitting at the same time on lap 14. Sauber does a bad stop and Kimi jumps ahead of Kamui. Great stuff!

But Alonso and Ferrari is out to spoil the party. First of all Kimi does a so-so inlap behind Kobayashi. In his defence, he was not in clear air. That combined with a quick inlap for Alonso in clean air and a pitstop that was exactly 2 seconds(!) quicker than the so-so Lotus stop, results in a lost position to the Spaniard. Not good. Earlier I accused Kimi for doing a so-so outlap but it was in fact quicker than Alonsos outlap. The main contributing factor to the lost place is the time Alonso made up behind Kimi before the stops and the insanely quick stop.

Up ahead, Vettel is romping off into the distance. Grosjean is unable to keep up and is trailing 15 seconds behind. They both pit and Vettel only extends his lead further. The German always seem to have something extra around this track.
On lap 27, Vergne in the Toro Rosso thinks its a good idea to bang into the side of Kovalainen for no apparent reason. Kovalainen can continue but Vergnes race is over. Safety car is deployed as well. Vettels lead of 20 seconds to Grosjean is gone. The game is reset.

Grosjean, Hamilton and Alonso pits. Shortly thereafter Raikkonen pits as well. However, McLaren are not rid of their pit stop gremlins yet. Incredibly they botch yet another pitstop for one of their cars. It takes 10 seconds longer than normal which moves Kimi up one place into 5th. Daniel Ricciardo opted not to pit and is in 4th. Alonso is in 3rd, a feisty Grosjean in 2nd while Vettel retains his lead.

Race restart and Alonso dives on the inside of Grosjean to take 2nd. Shortly after Hamilton takes his position back from Kimi. Seems very much like the Lotuses are vulnerable at the restarts. On top of that Vettels car gives up the ghost shortly after the restart and against all odds we suddenly have Alonso, who started 11th, now leading the race! Unbelievable. I have previously suspected that the Spaniard has sold his soul to the devil at the crossroads but I think we are close to letting go of any suspicion… 😉
Heartbreak again for Vettel. Seems when he has a DNF, it is always from the lead.

Kimi does a great pass on Ricciardo and takes up the pursuit on Hamilton. He is clearly faster but not fast enough out of turn 10 to get a good run on the Brit. The DRS zone was a bit too short to have an effect. In my opinion it should have started right after turn 10 for the entire length of the straight. Instead Alonso is able to get a comfortable gap to his pursuers. If only Kimi would have held Lewis behind him..

On lap 40, Alonso gets another lucky break when his main rival for the victory retires: Romain Grosjean. Cause: alternator fault. I would like to say that I was the better man and felt sorry for the guy. But Im afraid I didnt. I was gloating! Lol. Is that bad?
Anyway, Kimi is up to 3rd now. In the position he should have been in after turn 1. But thats the nature of racing. He finds no way past the McLaren until the end of the race. Predictably, Hamiltons tires are almost gone and Kimi jumps on the opportunity to take 2nd place! The fighting have given Alonso a lead of 7 seconds though, so the chance of winning is gone.

On the second to last lap we get another glance at the brilliance of Pastor Maldonado as he tries to take 2nd place away from Hamilton. He goes off the track in the process and decides to drive into the side of Hamilton when re-entering the track *applause*. Thankfully he was penalized:
http://www.formula1.com/news/headlines/2012/6/13503.html

Race over, Alonso won and does some weird antics and primadonna behaviour in front of his fans as he pulls the Ferrari to a stop. Oh well, each to his own I guess. Bring on Silverstone!

I almost forgot! Michael Schumacher got 3rd place. It took him the full amount of 46 races to get a podium after his comeback. For Kimi, it took 4.. Is it a fair comparison? Well, his teammate got 3 podiums in 2010, so I think it is. Nevertheless, good for Schumi. Such a weird sight seeing those three on the podium together. Turn back the clock almost 10 years and you would see the same podium now and again.

I was hugely disappointed when I saw Kimi lose that place to Hamilton after the restart. Especially when I saw how the race progressed. I tend to be hard on Kimi while I am watching the race and then when I dive into the matter and look closer at the data it is usually not as bad as it looked at first. My main criticism – in fact my only criticism is that he should have been much much tougher in defending his place from Hamilton. If he had done that, he would have been in a position to fight with Alonso for the win. But in fairness his teammate was also passed after the restart. So it is clearly a car weakness. Good on preserving the tires usually implies a little longer for them to heat them up as well.

Having read the transcript from the post race press con, Kimi actually admits to a mistake after the restart, which gave Hamilton the chance to pass him. So there it is:  http://www.formula1.com/news/headlines/2012/6/13501.html
(You will find the quote near the end of the page)
Or you can just watch this interview:
http://youtu.be/rQlBduF5BeU

Grosjeans pace was very good and most of the time faster than Kimi when comparable. But in these fidgety Pirelli tire times it is hard to tell how it would have played out. Sometimes fast in the middle of the race means very slow at the end due to spent tires. In this case its an unknown since we didnt get to see Romain finish today.

So 2 DNFs gave Alonso a victory and Kimi another 2nd place. And a podium is a podium. 3rd one after his comeback. He is cautious and fair. Which is why he has finished every race this year. Every race in the points actually. Except China where the long last stint didnt work out. I would say his comeback is highly impressive. I have 2 wishes though. That he keeps his cautiousness at the right times but also becomes a bit more ruthless when defending and overtaking. Obviously this is like balancing an egg on a knifes edge and very easy for me to say. But even if Kimi probably wont change his approach, I feel the best from him is yet to come this season. Allright, a 3rd wish as well: That he starts outqualifying his teammate again.

Surprisingly, its a 7 out of 10 for me. So much going on in this race, that I am glad that this is a Kimi centered blog. Because there is just no chance for me to touch on all the events and incidents that took place. Credit where credit is due. It is certainly not down to the track. Neither the DRS. But solely the nature of this years tires have given us a Valencia race that was quite enjoyable. At least for this race, I highly approve of these tires. Until next time: Relish the summer people!