A magnificent podium for Kimi Raikkonen in his 4th race after his comeback! Nothing short of sensational. Congratulations to him and the Lotus team that also saw teammate Grosjean on the podium. Well done.

You may however have spotted a bit of disappointment in the headline. Am I not thrilled? Of course I am. It was the result that Kimi and the team needed and it was a long time coming from having dominated the pre-season testing. But various mistakes meant that the long awaited podium had evaded them. Finally it was here and yet I cant help think that a win could have been achieved with some minor adjustments to their strategy and driver focus. Do read on.

Ah – qualifying.. A glorious hour on Saturday where we see the true pace of these mighty machines. Not masked by tire preservation, fuel saving or various strategies. (Well.. not entirely. But mostly.) I love every minute. As for the hero of this blog, we were just hoping that he would have a “normal” qualifying. Get safely through to Q3 and aquire a decent grid position.

The Bahrain track was very dusty this Saturday and grip levels were improving for practically every lap. Michael Schumacher suffered from this fact in Q1. Partly because of a fantastic lap by Kovalainen that saw him find 1.4 seconds between the beginning and the end of the session and partly due to a non-working DRS wing for the German. Lesson to be learned? Track gets faster by the minute.

Lotus and Kimi have preferred going out early in the quali sessions and this was no exception. Kimi gets a decent laptime on the board. But would it be fast enough? As the clock winds down and the laptimes improve, it is clear to everyone and his dog that his time will not send him to Q3. He would need another run. To my amazement, it didnt happen.

Granted, he saved a set of softs for the race. Thats all fine and dandy. But since it seems that the tactic was to do only one run, I cannot quite understand why they didnt send him out at the end of Q2. When the grip was at its best. Everyone who went out a second time improved their laptime by quite a margin. Which was what sent Kimi down to 11th.

Anyway – the damage was done and a lot of Kimi fans were quite furious over the decision.
Myself included. I was sure that the good result that Kimi and the Lotus was capable of, would be postponed for yet another race. Kimi however said that: “There are no points given out on Saturday”, and concluded with his trademark: “Let’s see what happens tomorrow.” Indeed.

Lights go out and Kimi gets one heck of a start! I cant remember anything like that since Spa 2009. From 11th to 7th in 2 corners. His teammate, Grosjean, does no worse and is up to 4th from 7th. Some of the damage from qualifying has already been neutralized. Vettel does a deja vu and takes the lead from his pole position. Perhaps we got a race on our hands after all. And did we ever..

Kimi goes wheel to wheel with Rosberg defending his position – and wins. Something that might explain Rosberg getting all mental while defending later, determined not to lose out again. But Kimi is chasing down Button much like he did in China. Bahrain is notorious for being hard to pass on, so my hopes were not exactly high for any advancement at this point. And sure enough, Kimi makes a small mistake out of the final corner which gives Massa the opportunity to use the top speed of the Ferrari to pass him on the straight. Bummer..

But whats this? Did my eyes just explode from the eyecandy on the screen?? Because I think I just witnessed Kimi repassing Massa through turn 5 and 6! Epic move. But he is not done – a couple of laps later he disposes of Button down to turn 4 and starts hunting down the Spaniard in the beautiful looking Ferrari.. Kimi fancies his chances and passes Alonso on the straight. Wham-bam, thank you Ma’am! 😀 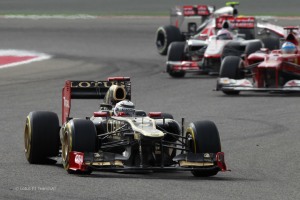 Up into 5th place, Kimi has his sights locked on the Red Bull of Webber in front. The frontrunners pit and after all is said and done and corrected for stops, we have Vettel still comfortably in the lead. Grosjean is up to 2nd. Webber is 3rd with our protagonist not far behind. *Cue dramatic music score* A horrible pit stop for Hamilton helped Kimi up the order.

Lap 13 and Kimi is all over the Australian. This time Kimi uses his sublime throttle control and car feel to get the perfect exit out of the tricky turn 10 to pass the Red Bull on the back straight. He flies by like nobodys business. Webber doesnt even have time to plan one of his lovely chops and is a helpless victim of the Icy train of fury. I do not recall seeing any other passing moves on top drivers down the back straight than this one. Correct me if Im wrong.

Kimi does another pass in the turn 5-6 combo that we didnt see on the live feed. This time on Kobayashi who has not pitted yet. Next target is the Croissant in the other Lotus. Mmm… Some lovely vichyssoise with a croissant on the side… Tasty. But I digress.

Before then Kimi was doing mid 1.39 laps. Now he is doing mid 1.40 laps behind his teammate. Apparently Kimi has had enough and goes on the team radio on lap 23 and says “If you want to try to win, I have to get past”. On lap 24 he passes Grosjean and takes up the hunt for the win. By now, Vettel is 6.5 seconds up the road. Something that would have been half that if they had just let him by on lap 21. It is this kind of stupidity from the Lotus team that cost Kimi a couple more tries on passing Vettel and likely the win. How the man doesnt complain of such an obvious blunder to the press is beyond me. Alonso does it. It is in times like these I wish Kimi would be more assertive and demanding. 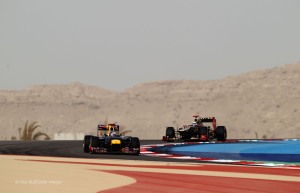 Well, maybe he was behind the scenes. But we also know that Boullier is the manager of Grosjean, so there is undoubtedly a conflict of interest there. I know I should be happy to see the Kimster running strong in second place. But I just know that the win would have been there if they had let him by right away. Instead he spent the best of his soft tires behind his teammate, when they should have been used to chase Vettel down! Silly silly Lotus. I hope a lesson has been learnt. One does not simply underestimate the Iceman.

In fact – watch this video of Ted Kravitz going over Kimis laptimes compared to Vettels. He is of the same opinion as me. From the 3:20 mark: http://www.youtube.com/watch?v=-aksC5S1N-U

Gary Anderson also has another opinion in how the race could have been won: http://www.bbc.co.uk/sport/0/formula1/17816565

But I am getting ahead of myself. Kimi on mediums is chasing down the double worldchampion who is on the softs. Lap 36 he gets close enough for his “one chance” as he put it, to pass the Red Bull. But Vettel defends well and Kimis tires have pretty much peaked at this stage and he cannot get close again. So when they pit on the same lap for the same tires, it was just a matter of controlling the race and the pace for Vettel while being informed of Kimis sector times.

So its status quo until the chequered flag. Vettel and Red Bull is back in the game with a win. A party that could have been spoiled by the Iceman, had only the team played their ace better. Still, I am happy to have enjoyed a great and exciting race with some eyepopping moves from Kimi. Best Bahrain race that I have ever seen, thats for sure. One is naturally a tad downbeat when you know a win was possible. And Kimi was too: http://www.youtube.com/watch?v=1jCn7FINQ6M

But for now – enjoy his passes here. As long as the video is up, that is: http://www.youtube.com/watch?v=PcmNN9Cp-Ws

The good thing is that there is more to come. I am sure that Kimi will have another shot at a win this year. Go Kimi Go!!

Its an 8 out of 10 for me. A win would obviously have been a top score. But an exiting and enjoyable race. Lots of action and not just of what I have recounted here. The battle between the McLarens, Ferraris and Mercedes was hardly boring. Hamilton overtaking Rosberg outside the track and Alonso being heavily blocked by the same Rosberg was quite a sight. But the chief provider of the eyecandy thrillride comes courtesy of K. Raikkonen.

And on behalf of F1 fans all over the world – we sincerely thank you for returning to Formula 1 where you belong.

Remember to rate the race and feel free to comment.

You can also join us in the chilliest group on Facebook:
http://www.facebook.com/groups/kimifanclub/