The ADAC Rally Deutschland is done and dusted and sadly I was not there in person to witness it like last year. Its a rally I have enjoyed immensely. Beautiful scenery, great stages, usually lovely weather and its a tarmac rally that Kimi is more prone to do well in. So even if I was not there in person, I had every intention of following this rally closely. So cue the rally radio, live timings and my forum friends 🙂

What a start to the rally – Kimi managed to spin in the third corner on the very first stage! Unbelievably, he still sets a 9th quickest time on the 24 km stage. 24 seconds behind fastest man Latvala. 1s pr km slower with a spin? Ok, thats promising..
SS2 underway and it starts raining. The two Sebastians in the factory Citroen have the correct tires on – softs. Kimi and the rest of the front guys are on hards. Lots of time lost and Kimi is down in 10 overall after this stage.

SS3 is dry though and Kimi starts to build some speed – but spins again! He complains that the tires are too hard. In spite of this, he still sets an impressive 8th fastest time.
SS4 starts and Kimi seems to be driving very well looking at the splits. He clocks a 6th fastest time. Now losing less than 1 sec pr km to the top guys. Oh, how I would have loved to have seen his pace with the right tires and minus the previous spins 😦

SS5 saw even more trouble. Braked to late at a junction and smacked into a tree on the left side. As can be seen here: http://youtu.be/pbLMynQTyFc
The result of the crash can be seen here on SS6. His door kept opening: http://www.youtube.com/watch?v=MSmg2qrU1vU
That was not exactly helping his time either. There are also reports of Kimi having the flu this weekend. Oh dear.

Get away or I will barf on you

So its a mixed 1st day. Glimpses of serious pace was shown but unfortunately hampered by spins and incidents. He is still in the game though. Unlike several others. Flodin, Hanninen, Østberg to name a few. Also Latvalas chance of victory was gone after day 1. Nobody said Germany was easy.

Saturday starts slow for our Kimster. The first two stages are not particularly good. SS9 sees him lose more time to his nearest rivals, Henning Solberg and Kuipers. He starts the monster-long, 34 km hinkelstein-infected SS10 Panzerplatte stage in 9th overall. His splits are looking really good for this one though. He keeps his pace through the entire stage and sets a 7th fastest time. This bumps him up to 7th overall as they head to the service park.
Just look at him go: http://youtu.be/zX0JJDnggLA

A stellar effort considering the sheer length of the stage and the fact he was feeling a bit under the weather. One must also remember that the two Minis of Sordo and Meeke are competing this weekend and without them on the board he would have been 5th fastest. But more competitors means stiffer competition. Especially from a big factory team like Mini/BMW. After the Panzerplatte stage Kimi is interviewed and states the following: “I was driving very bad today. This one was better.”

SS11 kicks off the afternoon and guess what – another spin.. He hit a bump, cut the engine and spun. A bad stage time sends him down to 9th overall again.. SS12 goes a tad better and Kimi said the car felt good. He even goes a smidge faster than his nearest rivals. A 6th fastest time on the next stage is impressive but Solberg and Kuipers are practically on the exact same pace so the battle for 7th still rages.

Meanwhile there is controversy afoot at the front. The Citroens of Seb 1 and 2 are 2 minutes ahead of the nearest rival and a team order is issued for them to hold position. Ogier has never had the best pokerface in these situations and his disgust is easily read in his face and his snarling “no comment!” replies to the press. This is good. We like drama. The heat is on. But the 9th straight Rally Germany victory for Loeb seems secure.

SS14 is the second run through the Panzerplatte stage and we are in for a couple of shockers here. The biggest is Loeb gets a puncture and loses over a minute to his teammate – effectively putting him out of contention for the win! Latvala has an off and buries his car in the bushes. Kuipers, one of Kimis main rivals has puncture and so does Hirvonen. Ogier doesnt hide his smugness after the stage but also sneaks in a comment about not knowing if he would be “allowed” to win this rally..

As for Kimi, he is yet again on some serious pace and clocks the 5th fastest time. Not only that – he is down to just being 0,65s slower pr kilometer than the top guys in factory machinery. Very impressive indeed. And yet Kimi delivers this line after the stage: “Better to stay home than go to this rally. Lot of mistakes today. Hopefully tomorrow will be another day.” Hm, he is disappointed with himself or maybe its the flu talking. Yes, some mistakes were made in the morning but he clawed himself back into 7th position with a controlled drive. His pairing with Kaj as codriver seems a perfect match.

Henning Solberg doesnt find confidence in the soft tires on the first two stages of the day and Kimi extends his lead to 44 seconds. A buffer that would come in handy on SS17. This time its Kimis turn to have a puncture about halfway through the 20 km stage. He loses 30-35 seconds due to this but is still 15 seconds ahead of Henning in the Fiesta.
SS18 is the second to last stage in the rally and Mini driver, Meeke loses power and has to stop on the stage. This promotes Kimi to 6th place. Admitted, not by merit but Ill take it. 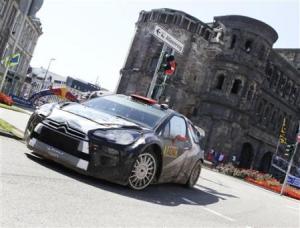 SS19 is the short super special stage in the center of Trier. If you recall one year ago, Kimi got his first stage win here. After SS18, Kimi said he “will try to do something” (in the powerstage). Boy, oh boy. That got me all excited. But alas, on his run he picks up a puncture on the first lap of the stage… 😦 I am certain he would have gone all out for a stage win here. And I am 100% sure he would have been in one of the top three spots. Oh, well. Thats how it goes sometimes. 6th place is very respectable considering a couple of spins and punctures. He kept it together and brought home some good points. Well done Kimbo. Even if you didnt enjoy it, I surely did 🙂

Congrats to Sebastian Ogier on his tarmac win and breaking Loebs winning streak in Germany. As you may know, Loeb has signed for 2 more years with Citroen. We have far from seen the last of the drama and rivalry between the 2 Sebs.

So what is next for Kimi? During the rally weekend we heard that he cancelled going to Rally Australia and that he is to test the Peugeot 908 LeMans racecar. You can easily read a lot into this if you want. And maybe we should. Its expensive to run a rallyteam with limited Red Bull sponsoring so perhaps Kimi is looking for a paid seat again. The 908 is a very good choice if you want to do serious racing outside F1. Nascar would be good too. But thats me. I enjoy seeing Kimis rally progress but he is still a circuit racer in my eyes. Some voices are even predicting a return to F1.

If you are a regular follower of Kimi you already know that there is no telling what he will do next year. And we will not know for sure until we hear it from the man himself. No matter what, it will be an adventure 🙂 Next rally for Kimi is the Rally of France in about a months time. Take care my friends.

-Dammit Kimi, not again! Crack the door open will ya?!
-Yes, but I think so its from the outside. Cows you know..
-There are no cows here, Kimi. Only grapes.