1 year ago, I sat right in front of the chicane at Turn 1 in Monza and witnessed Kimi drive one of the best races of his life. But he only finished 3rd you say? Yes, but he did not make a single mistake from start to finish. I watched him brake at the exact same spot every time and take the chicane without a single hitch. And that was while being pressured heavily by a faster car behind him. The Brawn, McLaren and Force India were all better pacewise and he still wrangled the F60 up where it didnt belong. It was a performance that should have been awarded with a win but if the speed and downforce isnt in the car, then it isnt.

QUALIFYING
What became apparent as qualifying progressed is that the Ferrari was going to be very strong around the high speed circuit. The McLaren had chosen a very peculiar path to go down. An F-duct and a higher downforce wing for Button and no F-duct and low downforce wing for Hamilton. In the end, it was Button that had the best kit for the track as he qualified a fantastic 2nd as Lewis could only manage 5th.

The Red Bulls looked strong in practice, but when it was crunchtime the car that was unbeatable in Hungary managed only 4th and 6th. Vettel in 6th is his worst qualifying in 2010. As expected, the F10 suited the Monza track perfectly and Alonso took pole position and Massa took 3rd on the grid.

THE RACE
Lights out and we are racing! Alonso botches his start and does an extremely aggressive blocking move on Button. But it is too late. He is already alongside the Spaniard and has the inside line for the corner and takes the lead. Very smooth by the Brit. Alonso tries a little too hard and drives into Buttons gearbox. He is very lucky to only get an insignificant hole in his nosecone instead of losing the wing altogether.

Lewis also has a good start and is pressuring Massa for 3rd. He overdoes it however in the second chicane. The Ferraris rear wheel gets his front wheel all out of shape with the inevitable retirement at the next corner. A serious dent in his championship hopes. But as we have seen all year, this title fight is crazy. It goes back and forth almost from race to race. Helped greatly by the new points system which in my opinion has been a success.

From then on the excitement was pretty much over for this race. Yes, Button, Alonso and Massa were all running close together at the front. But as soon as it became clear that Button was unable to pull away in the struggling McLaren then I knew that Alonso would pass him during the pitstops without any problem. The Ferrari was unbeatable around here.

And sure enough. After his pitstop on lap 37, Alonso takes the lead to a great roar from the tifosi. Even though the covered mainstand on the start/finish straight was not full for some reason. Button keeps 2nd ahead of Massa and the podium was set.

VETTEL
The only remotely interesting battle was one we were not treated to on screen. And it would have been hard to display on the TV as well. So thank goodness for Live Timing.

I couldnt believe my ears when I heard Vettel report another problem with his car early on in the race. Its past being funny and is just plain weird at this point. It made him lose a place to Webber and the Swedish commentators on my channel jokingly suggested it was a team order. The car resumed normal pace on the following laps and never seemed to suffer from it again. The Red Bull explanation was that it was a brake issue. A brake issue that made Vettel think that the car was losing power? Okay then.. Im no techie, but that sounds strange to me.

Anyway, Vettel is on softs and running in 8th place. This is not good for his championship aspirations. So Red Bull tries something radical. They just leave him running on those softs. Lap after lap. After everybody has pitted Vettel is up to 4th place. But he still has to pit and Rosberg is about 19 seconds behind. Now to make it out in front of someone at Monza, you need at least a 22 second gap. And here is where the only excitement came for me in the race. Would he be able to build up the margin needed or would those soft tires call it quits. Surely they had to be pretty much gone by lap 45 with 8 laps to run? 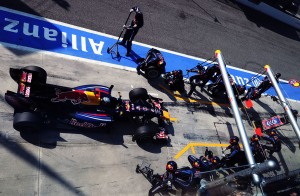 What is worse for Vettel is that Rosberg (who has driven a great race) responds to the pace of the Red Bull and the gap seems to be stationary at 19 seconds and the number of laps are running out. But with only a few laps left the Mercedes drops its laptimes a bit while Vettel gets a couple of good ones in. The gap is now 23 seconds and Vettel dives into the pits with only one lap to go. A flawless pit stop sends him out well in front of the Mercedes and he keeps his 4th place. Fantastic. If Red Bull are able to pull something like this off every race from now on, then Vettel will still have a very realistic shot at the title. Which means more excitement for us 🙂

His fightback means that he is now less than one win from the top of the charts if Webber has a retirement. So things can still change very quickly with 5 races to go and 125 points up for grabs. Bring on Singapore!

DOUCHE OF THE DAY
Its Hamilton for his overeager move on Massa so he gets the honors this time. He should have kept his cool and played it safe. But thats always easy to say from the comfort of my couch.

DRIVER OF THE DAY
I could give it to Alonso. I mean he won and all. But Im not gonna. Its Vettel for me. 52 laps on softs while trying to build a gap with a car that only had the 16th highest top speed is anything but easy. A fitting comeback for his Spa blunder. So congratulations to him. Why not Alonso? He screwed up his start and he missed the chicane a couple of times. Champions shouldnt do that. However, the speed of the car allowed him to get away with those mistakes.

2,5 out of 10. A bit low perhaps. But it was really dull compared to many of the great races we have had so far. Saving grace was Vettels drive and Webbers brillant overtake on Hulkenberg. It was on the outside but he squeezed (cleanly this time) the German onto the dirty side thus making him brake earlier. Nicely done. Great seeing Hulkenberg finish 7th in the Williams by the way. I like that kid.

Ok, thats it. Singapore is coming up. I have always liked that race. Perhaps Massa can crash there so Alonso can win again?

Soren says: As a man thinks in his heart, so is he.

2 Responses to MONZA RACE REVIEW – THE LULLABY OF SPEED