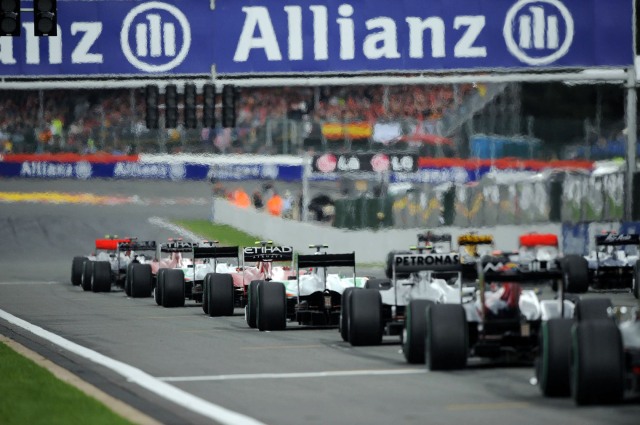 We are are back to arguably the finest circuit on the calendar. It was an exciting race. It had rain. It had crashes. It had drama. And I was looking forward to it as well. But to tell you the truth, I had a tough time writing this. I didnt think it would affect me not seeing Kimi race there. But it did. Kimi has a win percentage at Spa of 57%. That is higher than anyone who has ever raced there in the history of F1. I was considerably more upbeat last year. And its easy to understand why:
https://desdirodeabike.wordpress.com/2010/08/31/spa-2009-eyecandy-thrillride/

Now that I got that out of my system, there is plenty of stuff to look at. I will pick out what I consider the key moments of the weekend.

QUALIFYING
Red Bull were downplaying their chances here. But after Q3 was done, there was a Red Bull on pole again. 12 out of 13 so far. Thats gotta be some kind of record even if I havent checked the books. There were also rain involved in qualifying but I will limit myself to mention the people I think stood out in any way.

Kubica: Amazing qualifying for him. 3rd on the grid is impressive in the Renault.
Vettel: With Webber on pole, 4th can not be anything but disappointing for Sebastian. Whatever the reason.
Alonso: Same goes for Alonso who could only manage 10th. Whatever the reason, its a huge disappointment. Alonso says that the Ferrari is the best car he has ever driven. And yet Kimi put the F60 on 6th last year in qualifying.
Webber: Once again he jumps and grabs the advantage when his teammate doesnt deliver. Things like that can win championships.
Barrichello: 300th GP and 7th on the grid for Rubens. Thats very impressive. One has to admire the veteran with the undying fire in his belly.

THE RACE
It was to be one of the typical dry-wet-damp races at Spa this year. Meaning anything could happen.
Lights out and this time its the Red Bull of Mark Webber that gets a crappy start from pole. He is down in 7th after La Source. Vettel doesnt capitalize on that as he is passed by Button and are still in 4th. A pass that would prove to be both their undoing.

The rain is already starting to fall on the first lap. Which meant that everyone went wide at the bus stop chicane. It was a crazy sight! Rubens decided to celebrate his 300th race by ramming straight into Alonsos right rear wheel. The Williams car was toast, but I still dont understand how the Ferrari could survive such an impact. Luck of the Spanish perhaps. Alonso decides to put on inters now that he is well behind anyway.

Safety car is deployed and when it enters the pits after one lap, Vettel seizes the opportunity to pass Kubica for 3rd place at La Source. Alonso pits on lap 4 for slicks after the bad call to switch to inters earlier.
The race settles a bit while the track dries but we see Alonso disposing of the slower cars as he starts his fight back up the order.

Lap 11 we get the best overtaking move of the race. Of all people, its Petrov that puts in a wonderful move on the outside of Rosberg at Raidillon. Well done! Schumacher grabs the opportunity to pass his teammate as well and a piece of Rosbergs wing flies off in the process. They would go on to switch places a couple of times throughout the race.

VETTEL-BUTTON
Vettel had been close to Button a couple of times but the Brit does a great job making his McLaren extremely wide. On lap 17 it seems Vettels patience is spent. He makes a move and gets it all wrong. A quick flick from Jenson catches him out and he loses control of the Red Bull in the bumpy braking zone where it careers into the sidepod of Jensons car. The fact that it looked similar to the Turkey incident will not do the young German any favors. His head will be requested on a plate by many F1 fans. 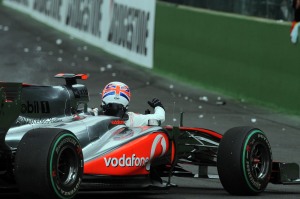 Jensons car is done and he retires. Vettel limps into the pits for a new nose but is way down the order in 12th. He has an exciting scrap with Liuzzi and I am almost holding my breath to see it happen all over again at the bus stop. It didnt, but shortly after he is awarded a drive-through for causing a collision and his race and hope for points was pretty much over by then. To add to the misery, Vettel has another fight with Liuzzi and his rear wheel touches the front wing of the Italian. The prize is going all the way around Spa in 5th gear with a puncture. Plenty of time to enjoy the beautiful scenery for Vettel.

Up at the front, Lewis Hamilton is having a relatively easy time and peels off into the distance. Kubica cannot keep up and Webber are never close enough to the Renault to make any attack. Lewis even keeps his lead after pitting for new tires. Its a real shame Vettel didnt make the pass on Button or I am sure we would have a fight to the finish for the win.
Near the end of the race, the rain starts again. Hamilton stays out on slicks but has a serious scare on lap 35 as he goes wide and are mere inches from the tire wall! How easily it could have been over right there.

This causes Kubica and Webber to close the gap to the leading McLaren. Maybe there is a still hope for an exciting fight to the finish? When Kubica pits for intermediates he is fiddling to long with the settings on his steering wheel and overshoots the pits. Webber drives right past him and inherits 2nd place.

On lap 38, Alonso found himself in 9th place. The track was wet and he had intermediates on. He makes an unprovoked error and goes up on the kerbs which makes him lose control of the car and proceeds to slide into the barrier. The Ferrari is at a standstill blocking half the track and the safety car is brought out. The spin: http://www.youtube.com/watch?v=_feWrTUw16k

I’d like to compare this to Kimis spin in 2008. Just for fun. The track was also wet but Kimi was on slicks. On top of that he was fighting against Hamilton in the wet weather superior McLaren. Kimi fought hard for the win and went out in a blaze of glory.

I just dont know what to make of all the mistakes from Alonso this year. Perhaps its true as some say. That Lewis got inside his head and stayed there. I dont know. 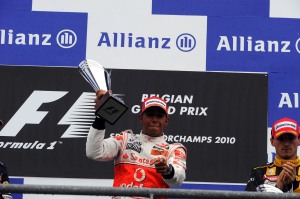 The safety car pulls in on lap 41 and from there its smooth sailing from Hamilton as he crosses the line and wins the Belgian GP. This time in a proper manner. Not really challenged but still a good performance.

Webber, Kubica and Massa follow suit. Vettel is one lap down in 15th. Is he really going to throw away a clear shot at the title this year or will he pick himself up by the bootstraps? I guess we will have to stay tuned for Monza. There is still 150 potential points up for grabs so its far from over for anyone. But the favorites for the title at the moment seem to be Webber and Hamilton.

DRIVER OF THE DAY
If not for the mistake in the pitlane, it had been Kubica hands down. But he threw away a 2nd place so he will have to share the honor with Lewis Hamilton. Still its a very impressive drive in the Renault. Lewis was not without error either but conditions were difficult. So he deserves it.

Good show from Rosberg and Schumacher. Both drove very well and had some good fights. I am still certain that Schumacher will be back much stronger next year.
Kobayashi did well to finish in 8th having started from 17th in the Sauber.

DOUCHE OF THE DAY 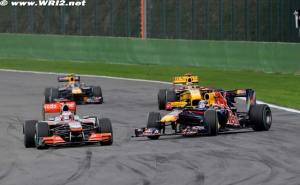 I have to award it to Vettel. If he had kept his cool, there would have been other opportunities to pass Button. But he didnt and now he has earned himself a reputation of a “crasher”. A little unfair as the track was bumpy and damp. It does happen. But its very unfortunate that he ended Buttons race and that it was so similar to the Turkey incident. The penalty was way too hard in my opinion. Its racing and it happens. But I get the feeling that the reason the penalty was given was the fact that it was Vettel. They may see him as a loose cannon and wants to put a stop to that.
But look at Kimi in Monaco 08. He also lost control on a bumpy wet track and destroyed Sutils race. Yet he correctly received no penalty for that. Because it happens. Maybe the fact that it was Kimi were the reason he didnt receive one? As he seldom does these kind of things. I dunno. Im just guessing.

Runner up for douche is Alonso for his unprovoked spin and crash.

SORENS RACE RATING
1 out of 10. Whaaa?? Yes. 1.. Kimi didnt drive. Du-uh..
Okay then. 6 out of 10. It was entertaining. But lacked a better scrap at the front. The one that was in the cards were ended prematurely. So a couple of points deducted for that.

Soon the high speed straights of Monza is on the menu. Look out for the Force India there. Because they sure had a lot of speed on the straights in Belgium. But I predict that McLaren is going to be very tough to beat there.

Soren says: If life gives you lemons then go to the grocery store and pick up some oranges.