RALLY FINLAND – HOME ON THE RANGE

The time has come for the most prestigious rally event of the year. The 1000 lakes Rally. Or as it is called now: Nestle Oil Rally 2010. This event is for Rally what the Monaco GP is for Formula 1. Everybody wants to win this one. But in the last 20 years – only 3 drivers have won it that were not Finnish. It seems like racing here is every Finns own backyard. And it takes something special to succeed here. Its fast, flowing and with plenty of jumps. If you dont know the stages or have perfect pace notes, you dont stand a chance. And its roads will catch out even the very best.

As for our own favorite Finn, it was the first rally of this season that he at least had some experience from before. He drove most of the stages last year in an S2000 Fiat. And he got some pacenotes which should help him in his quest for a good result. But alas, those very notes were to betray Kimi. I will get to that.

DAY 1
This rally would be a golden opportunity for Mikko Hirvonen to close in on Sebastian Loeb who has accumulated a huge lead in the championship. And the Finn is off to a flying start. After SS3 he has already got a 5 second lead on Solberg and almost 8 seconds to Loeb in 3rd. But on SS4 this happens: http://www.youtube.com/watch?v=cLsO-GG5Geo
It was freaking scary and Hirvonen looked shaky stumbling out of the car. No wonder. Luckily they are both okay but their chances for the championship are dwindling. 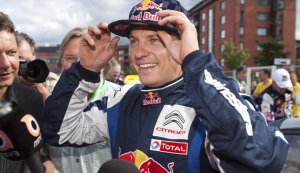 Thats 3 Fords out on the opening day. What about Mr. Raikkonen in the C4? Surely with such veterans out we would soon see a spectacular roll from him like we did last year? Even Citroen boss Quesnel didnt think Kimi would complete this rally.
But Kimi keeps it on the road. He doesnt set any spectacular times. Around 9th and 10th fastest and sometimes a little further down the order. We learn that he has had some gear and engine problems that have hampered him a bit. But the pace is not too impressive compared to what we had hoped for. Maybe he just wants to finish every stage so they can get the notes just right for next year? On the last short stage of the day, he shows a flash of speed however and sets the 6th fastest time.

DAY 2
In the meantime with favorite Hirvonen out, it is Latvala who shone on Day 1 and he starts the second and last day of the rally with a 12 second lead on Solberg. Maybe this will be the rally that will put the young Finn in the Hall of Fame of rallying?

Well, we Kimi fans didnt care much about this at the time because Kimi has an off on SS12 – the very first stage on day 2! http://www.youtube.com/watch?v=LJHb5bt0h38 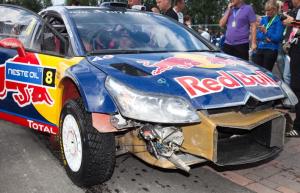 Its not a serious crash but it took some time to get him back onto the road and they had to find out how to put the tire that had come off the rim back in its place. Reports say they found a big stone and managed to jump on the wheel there so it went back in place(?) So he lost 10 minutes on that stage and about 3 minutes on the next.
As it turns out, his notes from 2009 were wrong for that corner. So what should have been an advantage became the very thing that prevented him from a good result. But that is how you learn.
It sure was a deep ditch: http://www.youtube.com/watch?v=yO3sypEmJLU

Kimi wasnt worried about it and neither was I. There is no way that Kimi can fight for more than a few points in gravel rallies this year anyway. As I have said before, notes and experience is key. And right now – Kimi has neither of those things. He only has an incredible God given talent and loads of untapped potential. That can get you places quickly in Formula racing but is not much use in rallying without the beforementioned ingredients.
Kimi: “There were mistakes but what can you do. I’m not too bothered about it. At least we learned these stages which was the purpose all along. One has to learn them if one wants to make it here and fight for top positions.”

Anyway – once the car is fixed in the service park, Kimi starts to set quite good times. And from SS15 and to the end of the rally he sets quicker times than the old fox, Juha Kankkunen. Granted, he is 51 years old but he knows the rally like the back of his hand. And is a three time Rally champion none the less. (Edit: 4 time champion actually. Thanks for the heads up from one of our readers.) Kankkunen was quoted for saying that he just wanted to beat Kimi in this rally. And had not Kimi gone off it would have been interesting too see that fight to the finish 🙂

Juha finished in an honorable 8th position while Kimi is classified as 25th. But from my point of view, these positions do not matter. What matters is his improvement in pace compared to the frontrunners. And of course – the experience. And I doubt his pace will improve much this year. Not before we see him return to a rally for the second time with some proper notes. This is what he had to say himself after the rally: “It was an extremely difficult rally. During our first passage through the stages, we just concentrated on checking our notes so that we could continue to make progress. As soon as the terrain became a bit more familiar, I was able to up my pace slightly. But there’s still a lot for us to learn before we can really start to go quickly on this type of terrain.”

Did Jari-Matti make it? Yes, he did! He withstood great pressure from Ogier and conquered Rally Finland. Well done.
He was a very happy man and understandably so: http://www.youtube.com/watch?v=cPttRNG_XgQ
Big congrats to him. He is now the youngest winner of Rally Finland. Awesome.

So, next up is Rally Germany in less than 3 weeks and yours truly will be one of the thousands of Kimi fans attending it 🙂 Looking forward to that. Its a tarmac rally like Bulgaria so lets hope for some quick stage times, points or not. Go Kimbo!

5 Responses to RALLY FINLAND – HOME ON THE RANGE