RALLY BULGARIA REVIEW – BACK ON BLACK

The much anticipated Rally Bulgaria is upon us. And the reason for the anticipation was obviously due to the surface – asphalt.

In case you dont know, Kimi is quite good on that stuff. He has won several karting series, and when he drove in the Formula Renault series he won 13 out of 23 races that year. Then his F1 career took flight and we know how that went. For instance he is number 3 on the all time list for Fastest laps. And that after a relatively short career in F1 – 9 years (so far). Michael Schumacher and Alain Prost who is number 1 and 2, was in F1 for 16 and 13 years respectively. Anyway – rally is the order of the day now, so lets get cracking.

Kimi starts off setting the 5th fastest time on SS1. And this time it is not due to retirements or small mistakes from his competition. No, its all out pace from the get go. The stage was 32 kms long and he was only 17 seconds slower than Loeb. And only 9 seconds slower than second man Sordo who is considered a tarmac expert. Thats pretty astonishing from Kimi in his first WRC tarmac rally!

If you recall, Kimi was about 1 – 1,5 seconds pr kilometer off the pace of the frontrunners on gravel. But this is about 0,5 seconds off the pace of Loeb and about 0,25-0,3 seconds off Sordo. Quite an improvement wouldnt you say? Naturally this being an entirely new rally also helps Kimi, as no one has any notes from last year to rely on. 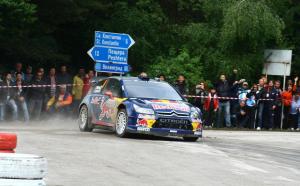 SS2 is the same story. Clocks another 5th fastest time and puts both factory Fords behind him like he did in SS1. Come on! Show your speed Kimi! SS3 he loses a little time but still gets the 6th fastest time. The reason is most likely down to him being the only driver on softs. Possibly trying to manage them. He is up to 4th overall after this stage because Ogier had an off and lost 50 seconds.

SS4 starts and Kimi seems on fire. By his second split he is faster than anyone! Even Loeb. This is bad news for me because a bet I made. I start looking around for which hat I should devour in case Kimi gets his first stage win..
But by the end of the stage, Kimi completely misjudges a corner and the grip he has. Tries to handbrake it around but the speed is too high and the car rolls into the ditch. Podium hopes gone: http://www.youtube.com/watch?v=wIzBbCsUono 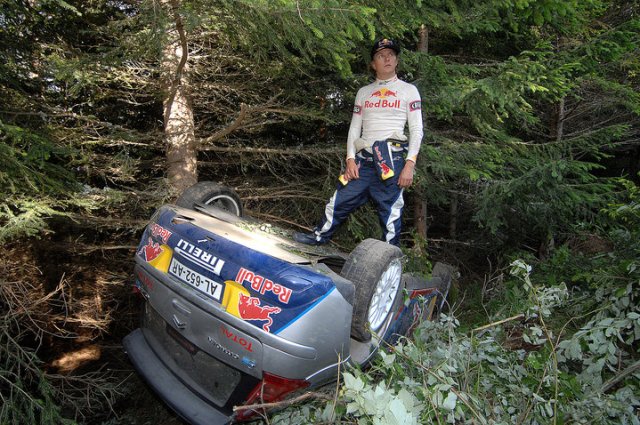 We dont hear anything for a long time and rumors start to say that it was a big crash. But it turned out to be only a small roll. It got pretty banged up though and the question was if he could continue the next day under the Superrally rules.

Turns out Kimis mechanics have sold their soul to the devil since they could turn a wreck into a perfectly looking car: http://www.youtube.com/watch?v=Xju0qbGRWDg
Kidding aside – amazing work by them.

What was cool to see was that Kimi hung around the garage while they worked on the car. Clearly interested in everything going on. It almost looked like his fingers itched to help them out a little bit.

So Day 2 starts and Kimi is still in the game. A podium let alone points is out of the question as he finds himself down in 26th place overall due to the 10 minute penalty added under the Superrally rules. He kicks off SS5 with another 5th fastest time. Again leaving both factory Fords of Hirvonen and Latvala behind. That in itself is stunning for a rookie even if the Fords did choose the wrong tyre for the morning stage. He is a bit further off the pace from Loeb compared to the day before. It would seem he was actually aiming for a podium yesterday and therefore pushing. 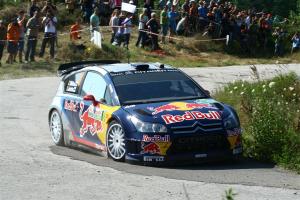 SS6 and 8 he is notably more cautious as SS7 gets cancelled due to unruly spectators. Too many of them on the roads. Maybe it was Kimis fault? 😀 Reports say that he was immensely popular and he and Loeb had the largest crowds in the service park. Fellow fans Kinga and Tsveti who was present at the rally told me that Kimi got even bigger cheers than Loeb as he went by on the stages.

SS9 and 10 is a repeat of Special Stage 6 and 7 and Kimi nearly gets back among the top 5 again. Hirvonen just edges him out in 5th place on both stages as he has now switched to soft tyres and improved his pace. Petter Solberg clocks the fastest time on SS10. That is mightily impressive considering not only the small size of his team but also the fact that he has an all new co-driver for this rally. It usually takes a couple of rallies to get into a good rhythm. Experience counts for a lot in rally and Petter is the most experienced in the WRC lineup.

Day 3 kicks off and on SS12 and 13, Kimi is again mingling with the top 5! And once again he has beaten his fellow Ford-driven Finns on both stages. This time it is not down to a bad tyre choices but sheer pace from the Kimster. Onboard from SS12: http://www.youtube.com/watch?v=Y0hhXD9wbtE

In the meantime he has crept up to 11th place overall and is 46 seconds behind scoring a point in spite of a 10 minute penalty. I did not expect that! Its Henning Solberg in the S2000 Fiesta in front of him. Surely with only a stage to go, catching him seems an impossible task.

Kimi blasts off and immediately has the quickest time in the first split. Is he going for it? By the 3rd split only Ogier is faster than him so yes, he is definately trying to catch Henning. Most of the field is controlling their drives by now of course but there is still a great battle between Sordo and Solberg in 2nd and 3rd place so those guys were not taking it easy on this stage.

But alas – Kimi overshoots a corner near the end of the stage and loses almost a minute. Listen to Kimi shout “Push Push!” 😀 http://www.youtube.com/watch?v=8IKTYxBl6g8
Had it not been for that off, he would have beaten Henning with a couple of seconds. So he remains in 11th overall. Still, it was a great fight back. As we know from F1, the boy can chase.

It appears a lot of his incidents take place near the end of the stages. You have to train your brain to process all the information coming to you. From your eyes, from your spine feeling the car, and from your ears the notes from your co-driver. There is that extra element compared to racing around a track and it is not something you can just jump in and do. If you are an incredible natural talent like Kimi is, then you can jump into any race car and be fast. And that does help in rally too. But learning to listen to, and make good pace notes is something that only comes with experience. And Kimi is getting there. But there has to be some trial and error first.

CRASHES
There is a saying that fast and unreliable is better than slow and reliable. Because its easier to fix the reliability than the lack of speed. If you wanna learn to be fast in rally, you have to crash. Thats right. You have to. Or you will never find the limits. This is what Kimi is doing now. He is finding the limits as well as exercising his brain to process all the information. It could seem that he is able to do so most of the time. But when he is pushing hard, concentration issues start to set in towards the end of the run and then the incidents happen. But like I said, he is getting there.

Besides, he has only had one DNF this year – in Mexico. And that was apparently down to a broken rear wing and therefore less grip than expected. Yes, there have been offs. But he got back on the road and completed the rallies and got the experience needed. Hirvonen had a DNF this year. Latvala and Solberg also. This is just the DNFs I remember from the top of my head but Im sure there are more.

Go back and look at any successful rally drivers career and you will see a lot of crashes. But those guys are all damn fast. And they got there by testing the limits and they still go over them from time to time. Loeb is someone who stands out since he makes so few mistakes and is still fast. Or rather the fastest. But it does happen to him too. But not in Bulgaria however and he wins yet another rally. So big congratulations to him. He truly is unstoppable.

Next up is Rally Finland. This is going to be great. Citroën boss Quesnel has already said the following: “I don’t know how Kimi does in Finland but I’m sure he is giving his best. I wouldn’t be so sure about him finishing the rally”, Quesnel laughed. Haha. Thats pretty funny 😀

Kimi has pacenotes for the rally from last year and Im sure he will push to get a good result. So no, I actually dont expect him to complete the rally either. Lol. But its gonna be great to follow nonetheless. Go Kimi!!!

P.S. Why dont you click here and join our awesome Kimi Raikkonen Fan Club on Facebook?
http://www.facebook.com/group.php?gid=137616013034&ref=ts
That way you will automatically get these reviews in your inbox as they get posted 😉

Update: Kingas video from Rally Bulgaria. A must see: http://www.youtube.com/watch?v=BDHnqxpkDvA

3 Responses to RALLY BULGARIA REVIEW – BACK ON BLACK