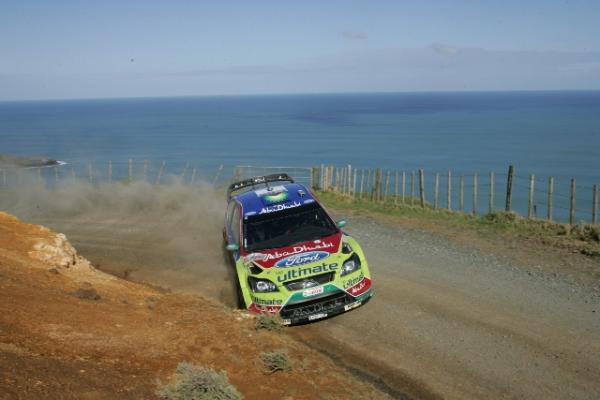 As I mentioned in my last rally review, I said I wasnt going to do one for New Zealand since Kimi wasnt going there. But this rally was so spectacular with so much happening that I just had to jot down a few words and bring up the highlights. So here goes 😀

Day 1 started out predictably, Loeb is first on the roads – lots of loose gravel on the stages and he sweeps them losing some time. But still keeps contact with the lead. However – on SS4 the unexpected happens! Loeb slides off the road, hits a bridge and damages his door and loses almost 1 and a half minute on the ordeal. Good news for the championship. Surely Mikko must jump at the opportunity.

But on the contrary, Hirvonen doesnt have the pace. And he even has a good starting position with the loose gravel pretty much cleared when he sets off on the different stages. Petter Solberg however, does some cracking driving and is in the lead after day 1. Very impressive, considering he was starting 2nd on the road with a lot of loose gravel still there.

Day 2 kicks off and Loeb takes off like a bat out of hell. He is starting 7th since that was his standing from day 1 and that gives him some good cleaned roads to drive on. But that doesnt explain the pace he shows on this day. He wins every stage except the 2 special stages. On SS14 he is 22 seconds quicker than the next guy. Thats not even funny. Thats just insane.

So from being 1:30 down after day 1, he is now just 5 seconds behind Sebastian Ogier who has taken over the lead again with another brilliant performance. Latvala is 3rd with 33 seconds up to Ogier. The stage is set for one big showdown on day 3. Ford teamboss Malcolm Wilson said about Loeb that it was the most impressive driving he had ever seen in his time in rally. And he has been in the game for some years, racing himself in the 80s with some of the greats.

Day 3 starts with SS18 and already on that stage the drama is on. The rally leader Ogier has a spin and loses 10 seconds and thereby the lead to Loeb. Sebastian Loeb has made one of the most remarkable fight backs in rally history from being 1:30 down and now he is leading the rally. Incredible. But the rally isnt over yet at this point. 3 stages remains.

And sure enough – on SS19 Loeb goes wide and is stuck for 40 seconds! Who would have thought that. 2 major mistakes in this rally from the master who hardly ever makes any. Now Ogier is in the lead again and Latvala is only 5 seconds behind him. Petter Solberg also benefits and is in front of Loeb in 3rd. The Norwegian eyes a 4th consecutive podium.

Mikko Hirvonen is only 2 seconds behind Loeb after his mistake. And this would be a golden opportunity to get past him to close the gap in the championship. But in SS20 Loeb goes quicker again and Mikko misses his chance.

SS21 – the final stage. Ogier is in the lead, 6 seconds ahead of Latvala. Could this be Ogiers first ever WRC win? But first we see another spin from Loeb! He lost precious seconds with Hirvonen looking to pass him in the standings. But the Frenchman had built up a big enough lead to see him finish 6 seconds ahead of the Finn anyway. Not Hirvonens rally at all.
The next we hear about on this defining stage is that Petter Solberg has stopped somewhere on the stage! So he retires from 3rd position. He was going flat out and slid a bit wide and hit a telephone pole knocking it over and almost rolling the car. A shame, but he went for it, I will give him that.

But what about Ogier? You couldnt have scripted this. With the finish line practically in sight, 3 corners from the finish line, he spins the car! He loses maybe 7-8 seconds and he is absolutely heartbroken when he comes across the line. Literally kicking himself. And behind comes Latvala – and its close. He has also made a mistake on the stage, albeit a small one. But he crosses the line 2,4 seconds ahead of Ogier. And he is over the moon. He didnt win a single stage in New Zealand, but he was consistant and never made any big mistakes. And sometimes that is enough in rallying. What a finish.

I stayed up and listened to the rally radio and Becs and Colin sounded like they were about to have a meltdown due to the drama. Very exciting and good fun. And this is without live TV coverage. Imagine how great this could be if they got some proper live TV coverage in place.

3 weeks until Rally Portugal where we will see the Kimster in action once again. Looking forward to that!