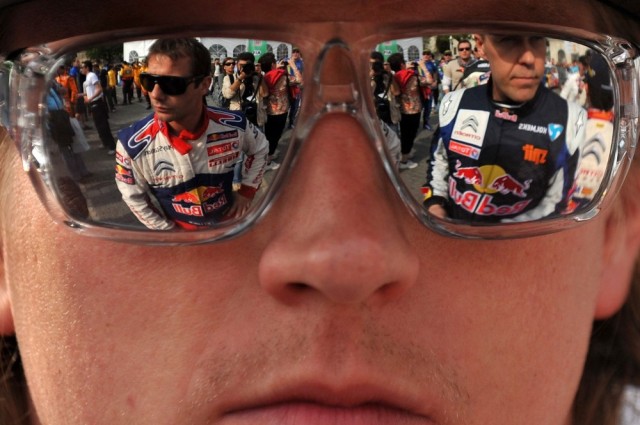 Son of a gun, that was fun! From day 1 to day 3 it was a thrillride from start to finish. I was lucky enough to be able to follow every stage on the live timing while listening to the rally radio on wrc.com. Thanks to Becs and her ‘gang’ for doing their thing and keeping us listeners updated.
Looking at the stage times from Day 1, it is clear that Kimi started out cautiously. Just finding his pace and his rhythm. In the meantime, two of the more experienced drivers, Ken Block and Henning Solberg were taken out already in the first stage by some of the big rocks thrown into the road by the cars before them. Could Kimi just finish the rally now, a few championship points might be in the bag again.

But he did more than that. After a couple of stages he started to almost match the pace of the much more experienced Matthew Wilson and Federico Villagra. On the last 2 stages on day 1 he ended up beating both of them. What is interesting is that a couple of stages had tarmac on the last part. Kimi was down several seconds to Wilson and Villagra before that – and he basically made up all that time in the final bit on tarmac. Bulgaria which is the first full asphalt rally cannot come soon enough.

Day 2 starts off with another big name out of contention. Latvala misjudges the amount of grip he has on tarmac and goes wide and rolls over. He gets going again but has a damaged turbo and slips down the order. Kimi on the other hand does a brilliant SS10 and passes Villagra in the standings. This means that Kimi is now in 6th place! His best overall so far. From then on there is just 2 full days of nailbiting action to endure, while praying Kimi will finish the rally :p

Now Kimi seems to have found his rhythm on the tricky roads of Turkey. He not only matches the pace of his nearest rivals but actually extends his lead. Beating Villagra on every single stage and Wilson on all but 2. At the end of day 2, Villagra is 30 seconds behind him. And Wilson is 1 minute 30 seconds behind Kimi due to a slow puncture and being held up a little by Latvalas stricken car.

Day 3 dawns on rally Turkey. But it has rained overnight and there is so much water in some places that the 2 first stages of the day are cancelled. SS20 kicks off the action and Kimi keeps extending his lead on his nearest competitors. But now what? SS21 and there is word that Dani Sordo has slid wide and is stopped on track! Does he get going again? It seems not. And Mr. Raikkonen moves up to 5th! Wham bam, thank you Dan! Only 2 stages to go until the finish and the drivers are reporting very difficult conditions. A lot of mud, very slippery. So I am holding my breath at this point. Every split time I see ticking in from Kimi brings a sigh of relief. 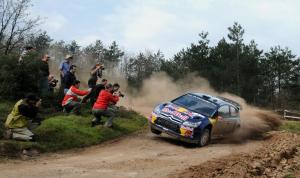 But he did it! He paced himself through the final stages and sure enough, Kimi Raikkonen takes 5th place in his 4th ever WRC rally. He came, he flew and he conquered! 10 points for 5th place and 14 in total. He is interviewed and seems completely unimpressed and calm about the whole thing. As usual. Just how we like him. He points out that they got lucky with some of the retirements but that is part of the rally. He goes on to say that their goal was beating Wilson and Villagra. They sure succeeded in that.
Enjoy 30 seconds of Kimi here: http://www.youtube.com/watch?v=6XmHAZiVIjI And some great onboard footage here: http://www.youtube.com/watch?v=FMfpdlz1sdU

The only mistakes Kimi made in the entire rally (to my knowledge) was stalling the engine on two separate occasions losing a few seconds. It was even on the same stage in the exact same spot. A hairpin going from tarmac to gravel. Not bad 😉

After Kimis great performance its easy to forget the fight at the front. Mikko Hirvonen was bent on getting a victory here. But he was missing that little extra speed on day 2. It looked within reach at the start of the last day. Trailing Loeb with 17 seconds. But then 2 stages were cancelled, meaning less time to make up the deficit. And a mistake on SS20 put an end to his hopes of winning. He hit a rock that punctured his tire and punched a hole in the car and the car was just filled with dust making it almost impossible to see. He was lucky to salvage 3rd after Sordos off. The game is still on of course. But Loeb looks as strong as ever.

Petter Solberg got another 2nd place in his privateer team. He is actually 2nd in the standings now. If that isnt impressive, I dont know what is. He is doing better than he did with Subaru! I think Ogiers and Petter Solbergs great performances must be a major worry for Sordo and his factory seat next year. He has had a very bad start to the season and is down in 6th in the standings. Just 2 points ahead of Matthew Wilson.

FINAL WORDS
The footage from each days recap showed that some of the stages was more rock stages than gravel stages. They were literally driving on big rocks and it looked pretty crazy. Even Hirvonen said after a stage that he was amazed how much punishment these cars could withstand. Put an F1 car on a stage like that and after 50 meters it would run crying home to its mommy.
Either that or it would disintegrate in a far worse manner than Buemis car did in China and then we would have another jaw drop from ZOMG cat like this one: http://www.youtube.com/watch?v=PtPvv4IS7HY

The Turkish rally also featured some crazy jumps. Check out Saluk from the Ukraine. It is the wildest jump I have ever seen. It even surpasses Novikov nearly flipping in Rally Finland last year. http://www.youtube.com/watch?v=B9FVJ-wUsK0
It was awesome to watch but as you can see he lost one of his front wheels. Lol.

The next rally is in New Zealand in 3 weeks time. Kimi is not scheduled to participate in that one unfortunately. Neither was Ogier but they changed that after some brilliant drives from him. And when he proved to be a team player in Jordan. I still have a small hope that Kimi might participate there as well. Especially considering his solid performances in the last two rallies. Lets wait and see. If not, I dont think I will write a review. But you will get my F1 race review of the Spanish GP as planned.

Oh, by the way. Some very nice girls run the Octeto Racing Team Blog and Ludy from there have interviewed yours truly 😀
You will make me and the girls happy if you gave it a click. And you will also learn a little bit more about me and what makes me tick 😉 The site is Brazillian but the interview is in english: http://octetort.blogspot.com/2010/04/octeto-entrevista-soren-thygesen.html